On Earth, glaciers are common at high elevations where snow accumulates each year in mountain valleys. Once the snow pack becomes thick enough and compressed to solid ice it will start to flow down hill and becomes glacier. At lower latitudes these alpine glaciers more often occur on poleward facing slopes where sunlight is limited and snow melt is slow.

On Mars, landforms resembling alpine glaciers are now found to be common at middle latitudes.

This image shows an example of such a landform at 41 degrees North latitude. Snow and ice accumulated in the mountain valley in the Southern areas of this image, where the rounded valley headwalls (called “cirques”) were gradually carved out by the slowly flowing ice. This flow of ice is indicated by long stream lines, called “lateral moraines,” ridges of rafted soil and rock debris from the cirque regions.

An interesting aspect of this image is that the flow from these cirques appears to have overtopped the South rim of a large crater at the North end of the image, filling the crater with ice. Once filled the ice flow breached the North rim of this crater and flowed out onto the adjacent plain. Such rapid drops in elevation for a glacier are call “ice falls,” analogous to a water fall. Fresh ice falls often exhibit fractured and broken surfaces as the ice flow breaks into crevasses. High resolution images such as this can help scientists to understand the rate and thickness of the flow by examining such characteristics.

Today Mars is cold, with a global average temperature of about -68 Celsius (-90 Fahrenheit). Mars is also a very dry place and surface ice is unstable everywhere on except for on the polar caps. Any ice left on the surface would evaporate without ever melting, called “sublimation.” However, past climate changes have periodically allowed snow and ice to be stable on the Martian surface and even to build into glacial masses, hundreds of meters (yards) or more thick. In this image, the visible surface is made up of regolith (rock and soil debris) and no ice is visible. Subsurface ice may still be present and protected by this soil cover. 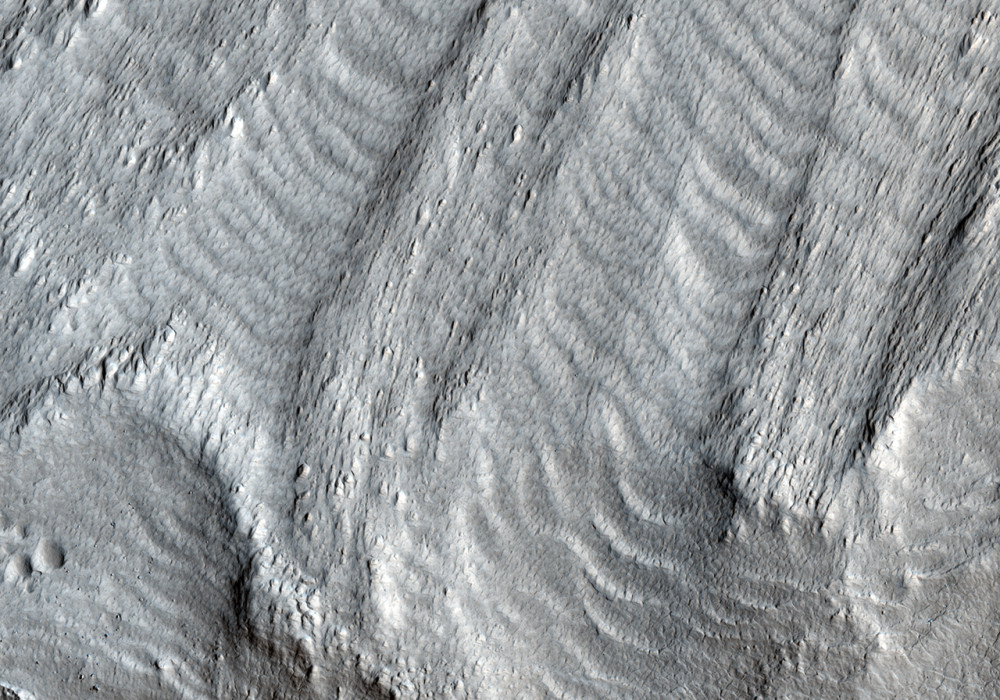