A Fresh, Lunar-Like Crater on Mars

This image is of an approximately 5 kilometer (approx. 3.1 mile) diameter crater that is one of the rare examples of a fresh “lunar-like” crater on Mars. The impact crater formed in the Tharsis region, which is the volcanic region on Mars that harbors the great Olympus Mons volcano — in fact, this crater lies just 150 kilometer (94 miles) from the flanks of Olympus.

Now most really fresh craters on Mars typically have floors with a frothy, pitted deposit on them ( see Zumba Crater caption ), which possibly suggesting that water/ice was present in the subsurface prior to impact.

This 5 kilometer crater completely lacks such materials. Instead, the crater possess a deposit is generally smooth with some rocks peppered throughout the deposit. This is more similar to observations of fresh craters on the Moon. This distinction from the more typical pitted crater floor deposit may support that the lavas sampled by this crater were low in water/ice or dry at the time of impact. There are some smaller craters superimposed on the floor, which is a sign that the crater is reasonably fresh, but not as recent as other craters on Mars.

There’s also a lot of Martian dust in this crater, which often gives geologic forms a somewhat muted appearance, some of that dust and fine-grained material may be the source of the materials that comprise the “sand” ripples in the bottom-half of the subimage.

Note: By “fresh,” we are speaking in geologic terms, not something that just occurred. 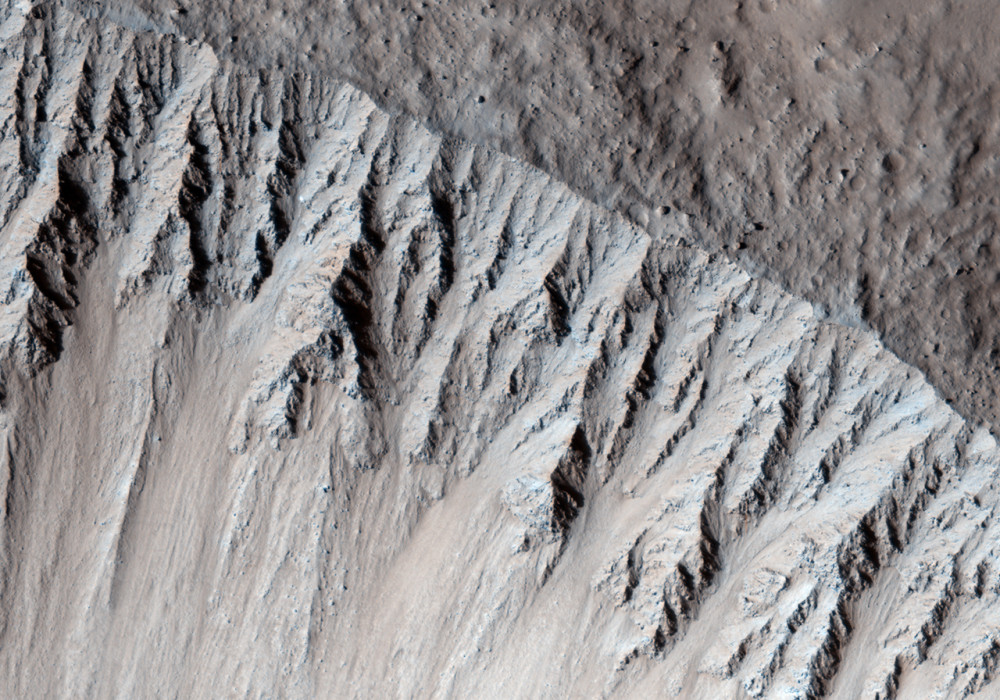