A Giant Cave on a Giant Volcano

Pavonis Mons is a giant shield volcano similar to (although larger than) those on the Big Island of Hawaii. These volcanoes are mostly made of stacks of overlapping lava flows. These images and digital terrain model (DTM) show a collapse feature on Pavonis Mons. The walls of this conical pit are steep (about as steep as it is possible to get before loose material rolls downhill). The material that used to be here has drained downward through the opening seen in the center into a subterranean void and formed a debris pile. The top of this debris pile can be seen through the opening about 28 meters (92 feet) further down.

From this DTM we can measure how much material drained out of the conical pit and so estimate how tall the debris pile is. These estimates are enormous: the debris pile itself is at least 62 meters (203 feet) tall. Given that the top of this pile is 28 meters below the rim of the central hole, this tells us that the empty cavity was once 90 meters (295 feet) deep, prior to the collapse and infilling! Only a handful of caves on the Earth reach or exceed this size and they all formed by having liquid water dissolve underground limestone, neither of which are readily available on Mars.

Sometimes the tops of lava flows freeze on the surface even while the lava continues to move underground in a lava tube. If these tubes drain, then lava tube caves can be left behind. Sections of the roof may later collapse, creating roof openings, and these openings can be imaged from orbit. Could this be a view into a lava tube? If so, it would dwarf all lava tubes on the Earth! It’s also possible that this collapse is above some more substantial part of the volcano’s internal plumbing system and collapses deep with the mountain are allowing voids to open up near the surface. It would no doubt be very exciting for future astronauts to explore this mammoth cave and figure out its origin.

View the DTM details page for this observation . 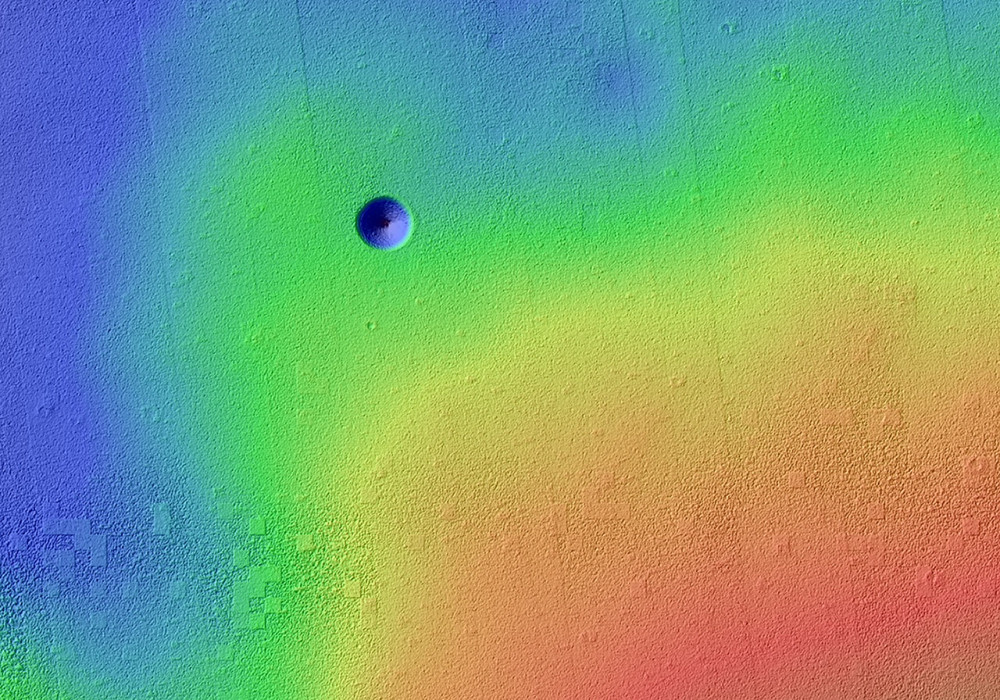