A Pair of Small Pit Craters

Pit craters exist in volcanic regions across Mars, and form when surface materials collapse into large underground cavities. Such pits are generally bowl-shaped, filled with sediment, and are relatively shallow when compared with their diameters.

Recently, a small number of anomalous pit craters were identified with strikingly different visible and thermal characteristics such as: sheer cliff walls; deep interiors that can extend out-of-sight beneath the surface; and temperature fluctuations that behave unlike any known feature on Mars.

The pair of pit craters visible here are the smallest “anomalous” pits known to exist at this time. These have either vertical or sub-vertical interior walls (not visible from a nearly overhead viewing perspective), and each pit is deep enough that sunlight does not hit the floor when it’s at the zenith. Unfortunately, the only thermal-infrared camera currently orbiting Mars cannot resolve features this small, so the temperature characteristics of these pits must remain unknown for now, underscoring the need for a high-resolution thermal instrument on future missions.

Intriguingly, when pit craters on Earth have similar characteristics to the pair shown here, they often have cave entrances in their bases connecting to large underground networks. Current investigations are determining whether the anomalous Martian pits may be shown to contain such entrances.

The ability to detect and explore Martian caves is of intense interest to many disciplines in planetary science. Caves may expose entire sets of stratigraphic layers, providing windows into Mars’ geologic and atmospheric histories.

Cave environments can also protect organic life from extremely harsh conditions on the Martian surface, and may provide future human explorers with secure habitats. Accordingly, caves are considered among the most promising locations to find preserved evidence of past or present microbial life.

Furthermore, the challenges associated with Mars cave exploration may inspire a range new technologies, such as advanced robotics and target-specific landing capabilities. 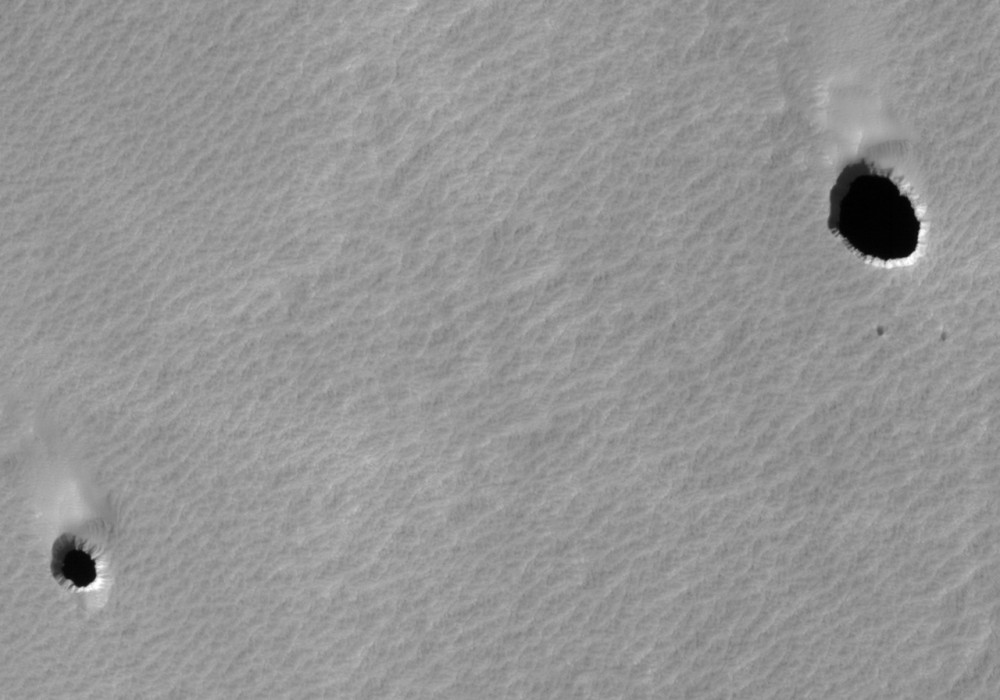