A Tale of Two Craters

The two craters in this subimage are of similar size but have very different appearances. This is because they are different ages. Can you tell which is older?

Sometimes you can tell something about relative ages using a geologic principle called “superposition.” This means that something that formed later than another feature will overlie the older feature. For example, a younger crater would have its ejecta emplaced on top of an older crater. That particular situation is not very obvious in this image, although you might be able to see hints of it if you look closely at the high-resolution JPEG2000.

There are still a few more obvious clues to their relative ages, though. The larger crater (approximately 45 meters, or 150 feet across) is shallower relative to its size, and it has a rim that is more subdued and “softer” looking. It also has a distinct texture on its floor. These could be ripples or small dunes formed by air-blown dust or sand, which would require a long time to form. The smaller crater (10 meters, 30 feet across) does not appear to have any such patterns in its floor, indicating that it is probably younger.

Another clue is the dark area surrounding the smaller crater. This is an area where either lighter surface dust was removed by the impact event, or where darker ejecta was blown out of the crater, forming extended streaks. You can even see very tiny grooves extending radially from the smaller crater, where material was thrown out at a low angle, scraping the surface or creating lines of tiny “secondary” craters where clumps of ejecta impacted the surface. These types of features are very fresh. They do not last a long time on the Martian surface, where wind blows dust around and fairly quickly (in a geologic sense) erases or covers up fine features like these. So these are more clues that the smaller crater is relatively young and fresh-looking.

If this were not enough evidence, we also happen to have an image of this spot from 2005. This image from HRSC (the High Resolution Stereo Camera on the Mars Express spacecraft) shows the same scene, and the dark area around the smaller crater had not yet formed when that image was taken. Since these dark areas form around new craters, this supports our conclusion based merely on the appearance of the two craters, that the smaller one is younger. 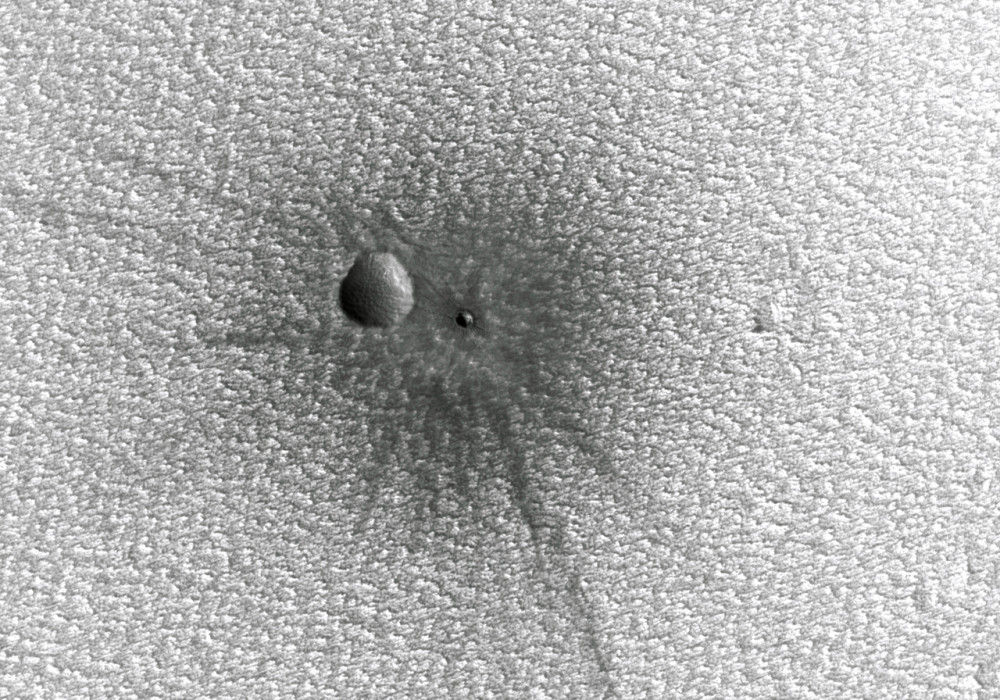