This image shows portions of an alluvial fan complex in Harris Crater, an approximately 83-kilometer diameter crater located on the Northern rim of the Hellas Basin.

An alluvial fan is a fan-shaped accumulation of loose, water-transported material deposited where an upland drainage emerges into a low-relief basin. In this case, two source regions on the Northern crater rim fed discrete lobe deposits that make up the alluvial fan complex. These lobes have different surface textures that enable researchers to map out the different components of the fan and investigate the sequence of fan-building processes that operated in the past.

The fan surfaces have experienced erosional degradation, presumably the result of wind. One interesting result of this is the formation of “inverted channels,” where the former channel floors are now preserved as ridges. Tributary channels on the alluvial fan were armored by coarse gravels or chemically cemented, making the channel bottoms resistant to erosion. Over time, natural erosion from wind and other processes left the inverted channels elevated above the surrounding terrain. The inverted channels record the former flow direction. Differences in channel orientation point to different source regions. In this subimage, inverted channels from one source region are identified by black arrows, while a second flow orientation (marked by white arrows) that originated from a different source.

A rugged surface texture, outlined in white, is on top of some of the inverted channels. This material is a late-stage deposit in the formation of this alluvial fan complex. The HiRISE image shows that this material is boulder-rich, which suggests the material was transported in a debris flow (a sediment-concentrated slurry of material).

The preserved landforms record episodic fan formation (different portions of the fan were active at different times) resulting from different fluid flow processes. The transition from fluvial to late-stage debris flow(s) suggests a decline in available water and/or change in sediment supply. In-depth geologic investigations, such as this one, help refine our understanding of the relative timing and necessary climatic conditions required at the time this alluvial fan formed.
Written by: Becky Williams   (1 September 2010) 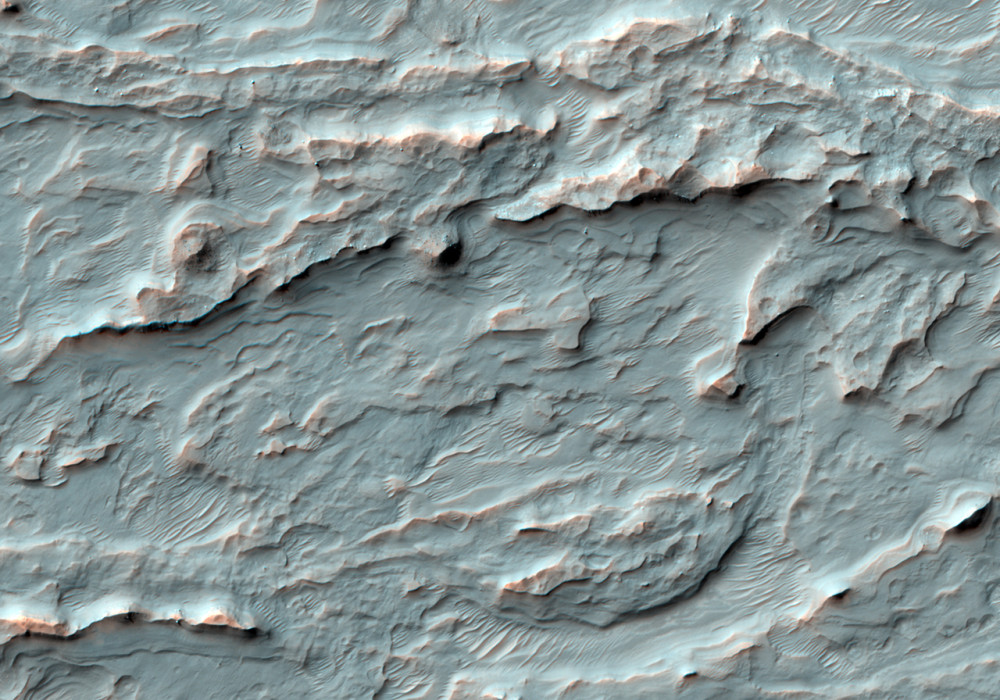