This observation shows the very steep side of a plateau, part of the northern limit of the Kasei Valles system, which is one of the largest outflow channel systems on Mars.

The difference in elevation here between the mostly flat channel’s floor (bottom right) and the top of the plateau (top left) is over 1,300 meters (0.8 miles), comparable in height to the Grand Canyon walls.

The Kasei Valles system is much wider than the Grand Canyon, though, getting to be in places 500 kilometers (300 miles) wide. (The Grand Canyon’s maximum width is 30 kilometers, or 18 miles).

This subimage shows numerous paths with the appearance of dotted lines, criss-crossing the steep side of the plateau. The carving agents can be found at the end of some of these paths: rocky blocks such as the ones in this subset, up to 2 meters (2.2 yards) across (4 meters or 4.4 yards across elsewhere in the image).

Some of these blocks traveled downhill several hundred meters (yards) as they rolled and bounced leaving behind a trail of indentations or poke marks in the surface’s fine-grained, light-toned soils. The raised borders in some of these poke marks indicate they are relatively recent features, unaffected by wind erosion, or that this soil has cohesive properties, such as if it was cemented.

The sound of these blocks falling did not travel very far, though. According to computer simulations sound in Mars travels only 1.5 percent the distance it would travel on Earth. (No Martian sound has ever been recorded.) Hence, the same sound which would travel one kilometer (0.6 miles) on Earth would travel only 15 meters (16 yards) on Mars. This is due to the lower Martian atmospheric pressure, which is approximately one percent of that of Earth. 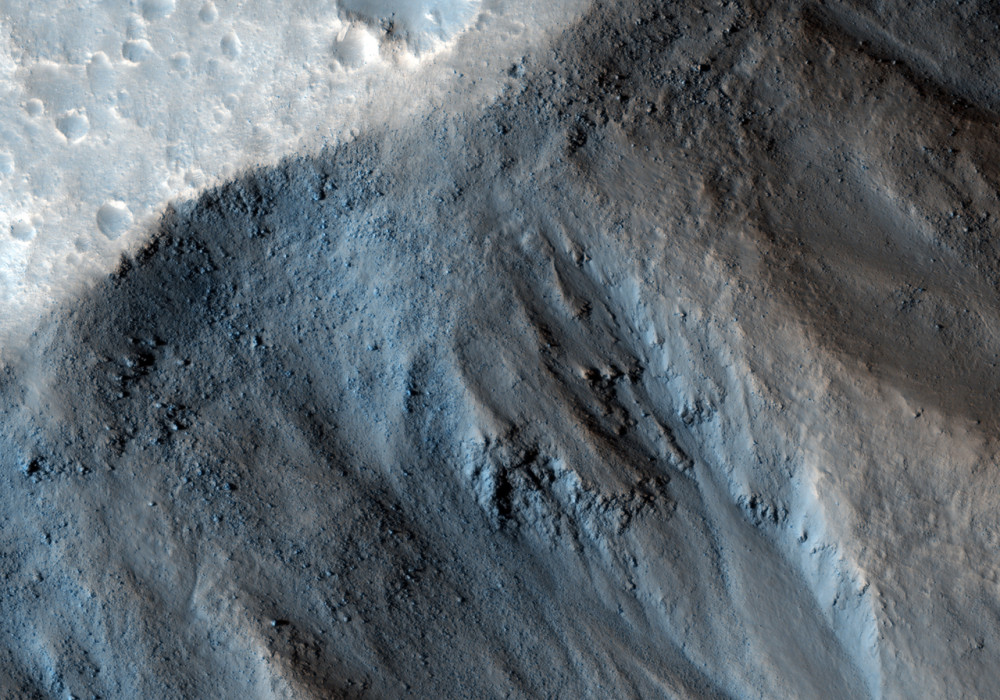