An Elevated Crater in the Apollinaris Mons Region: Volcanic or Impact-Related?

Impact craters are very common on the surface of Mars. However, when a circular depression is visible on the summit of a mound or an elevated landform in general, careful analysis is needed to identify whether the crater is created by an impact or by volcanic activity.

This issue becomes even more problematic when the crater is located in a area known for its volcanic history such as the Apollinaris region where this image was taken and is very close to the prominent volcano Apollinaris Mons.

In fact, this classical problem has been encountered before here on Earth in the case of the famous Meteor Crater in Arizona just outside of the city of Flagstaff. Back in the late 19th century, many people believed that Meteor Crater was a volcanic crater because of its proximity to the San Francisco volcanic field and the rarity of impact craters on Earth.

Meteor Crater remained controversial until the 1960s when scientists were finally able to confirm that the crater was indeed an impact crater by identifying minerals in the crater site that can only form in extremely high pressures, which are usually associated with violent impact events.

In the absence of such “ground truth” or lab analysis, how can planetary scientists differentiate between impact and volcanic craters? There are a number of ways. For example, impact craters usually exhibit raised rims and distinctive ejecta patterns around the crater, formed by materials ejected during the impact event. Large craters (more than 7 kilometers-wide in general for Mars) exhibit central peaks that form due the rebound of the ground right after impact. All these features are not usually observed in volcanic craters. In this observation, none of these features is visible. Nonetheless, this region is old and heavily dusted so all the above-mentioned features may have been eroded away or are covered by other materials.

However, we can see in this image that the crater is on the summit of a mountain- or hill-like elevated land form. In addition, some of the materials at the base of this elevated land form exhibit a rough texture that may resemble volcanic flows. If we add to that that the region is within a volcanic area, it becomes highly likely that this crater in particular is, in fact a volcanic crater. 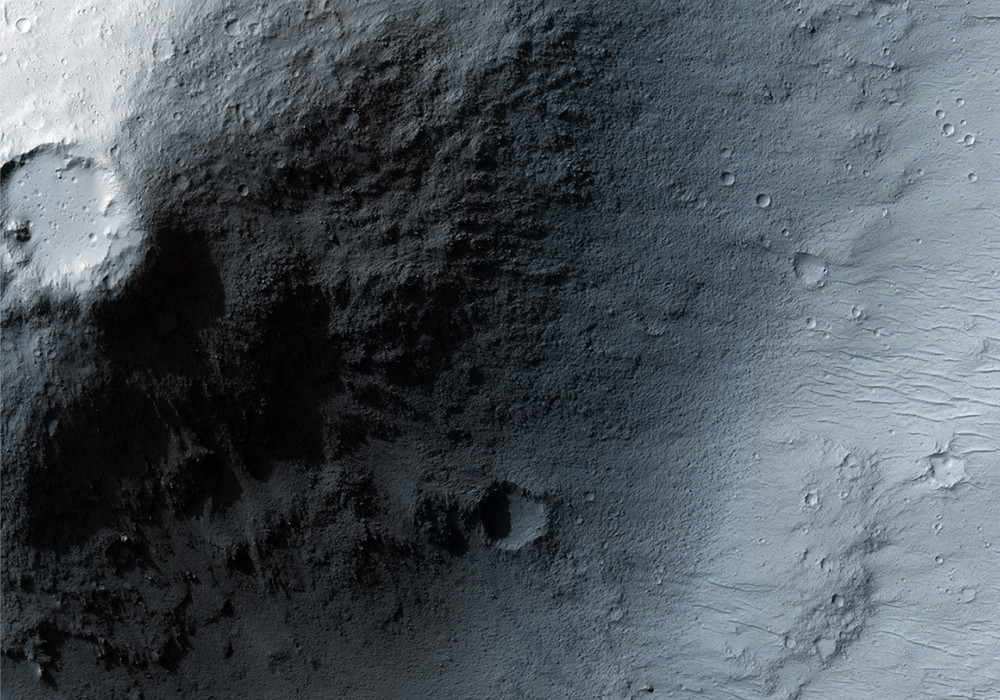