This HiRISE image shows at least three isolated clouds of particles near a steep cliff in the northern polar region of Mars.

These clouds, rolling or hovering close to the ground yet reaching up tens of meters high (up to 180 feet), are likely the result of an avalanche or fall of mostly carbon-dioxide frost. The frost clings to the scarp in the darkness of winter and may be disrupted by sunlight and thermal processes with the coming of spring. The cliff, approximately 700 meters (2000 feet) high is made up of layers of water ice with varying dust content, roughly similar to the polar ice caps on Earth.

On top is bright white carbon-dioxide ice and frost. Last year, HiRISE was monitoring this area for changes in frost patterns as spring progressed – it was quite surprising and very exciting to find an avalanche in progress (e.g. PSP_007338_2640 )! This year, we were ready to capture more.

Targeting this scarp as well as others around the edge of the north polar icy layered deposits will help determine if this process is a characteristic one in Mars’ cycle of seasons, including the period of year it is active and how wide-spread around the region it is. Several such events occurred earlier this year at this same scarp (e.g. ESP_016173_2640 ), and several more were also seen at a few other scarps (e.g. ESP_016228_2650 ) spread around about one-third of the circumference of the polar region.

Looking at all of the individual instances of avalanches from all of the images will also allow us to piece together a sequence of snaphots of the whole avalanche process, from beginning (a stream of material falling down the cliff face) to end (lingering puffy clouds). Based on this year’s observations, these events happen mostly in the middle of spring, roughly equivalent to April to early May on Earth. And, they are indeed more widespread than just this one scarp. All together, it seems this is a regular spring process at Mars’ north pole that may be expected every year – avalanche season! This information, in conjunction with the results of numerical modeling of the behavior of the materials involved, will help us find out what is causing these dramatic events. 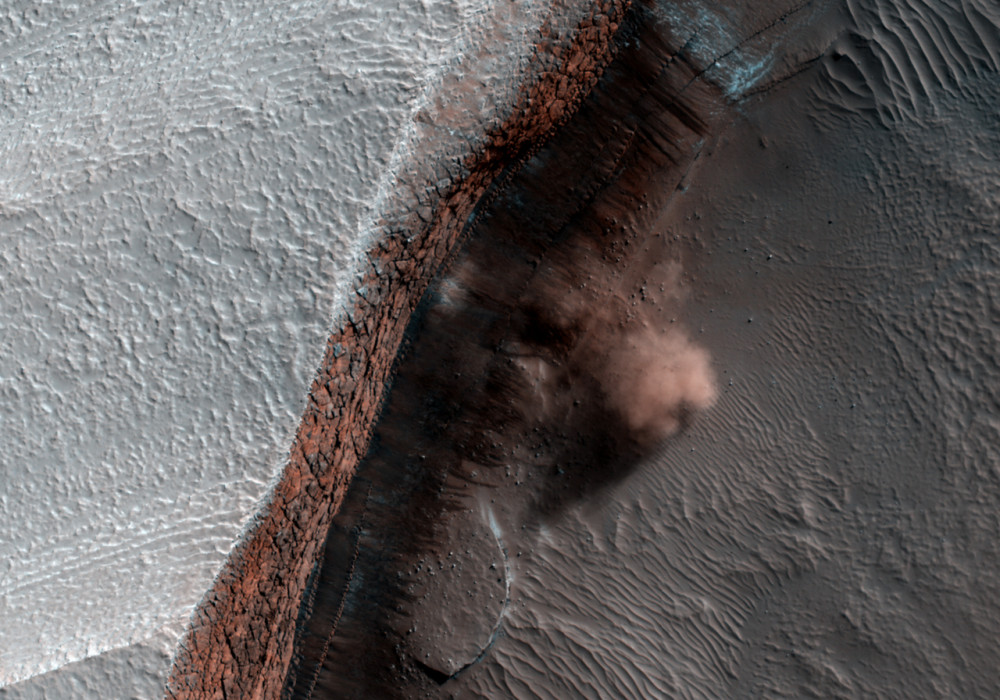