This image captures unusual arrow-shaped sand dunes in the north polar Olympia Undae region that may have been formed by changing winds. The dark patches and streaks show sand that has begun escaping from a blanket of seasonal frost.

Many of the typical types of Martian dunes are similar to common dunes on Earth. Transverse dunes have gentle upwind slopes and steep lee sides that are perpendicular to the wind direction. Barchans are crescent-shaped dunes with a gentle upwind slope and steep lee with horns. Other common dunes on Earth and Mars are seif dunes that form sinuous parallel ridges with bi-directional winds forming the slip-faces.

The dune types in this image transition from transverse in the south through tight chains of barchans, to the strange, elongated dunes in the north. These elongated dunes appear to be modified barchans with two slip-faces and asymmetric horns. The drawn out limbs and remnant slip-faces were apparently produced by variations in the wind direction. The winds that created the transverse dunes blow from a single easterly direction, while the modified barchans are shaped by winds from an easterly-northeasterly direction. The elongated horns align parallel to northeasterly winds. These wind variations could be caused by local topography.

Two factors likely contribute to the unique morphology of these dunes. First, the southern horns defrost sooner than the northern horns because they receive sunlight more directly. This enables material to move more easily on their southern side. Second, the changing wind directions may be reorienting the dunes. One idea is that the barchans southern horns are being blown downwind into linear (seif-like) dunes, with sinuous crests and steep flanks. Another possible explanation is that they are drifts of sand ( lee dunes) that form in the lee of an obstacle. The frozen barchans might act as obstacles to the wind, allowing loose sand to accumulate in their lee. In either case, the interaction between the sand, wind, and seasonal frost sculpts the dunes to their unusual, arrow-like appearance. 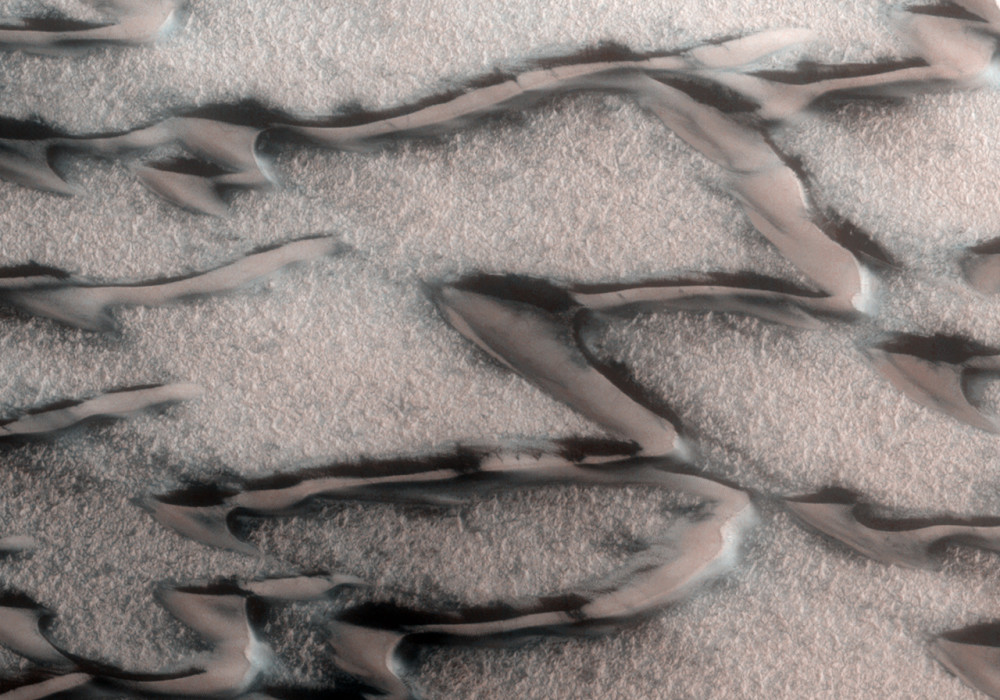