Bedrock in a Trough in Asimov Crater

This image was acquired in southern winter over part of Asimov Crater (latitude 47.5 S), showing the equator-facing slope of a deep trough inside the crater. The crater appears to have been completely filled by a thick sequence of materials, perhaps including sediments and lava flows .

Later, deep troughs formed around the outer edge of the fill material, probably by collapse over void spaces at depth. What made the void space is not known, but one idea is that there were lenses of ice that slowly sublimated into the atmosphere. Another idea is that this is part of a sequence of crater fill and “exhumation”, that includes Gale Crater (home of the Curiosity rover). In other words, continued collapse and erosion of Asimov crater could eventually lead to a central mound like Eolis Mons (popular known as “Mt. Sharp”) in Gale Crater. However, at Asimov crater, the southern trough has destroyed the southern rim of the original crater, which didn’t happen at Gale Crater.

Many of these steep trough slopes in Asimov crater, where facing the equator, have recurring slope lineae (RSL) activity in the summer when the sun-facing slopes get warm. The RSL fade in the winter, so none are seen in this image even if they were present last summer. There are no previous HiRISE images acquired in the summer over this location.

Asimov Crater was named after Isaac Asimov, professor of biochemistry and prolific writer of science fiction and popular science books. 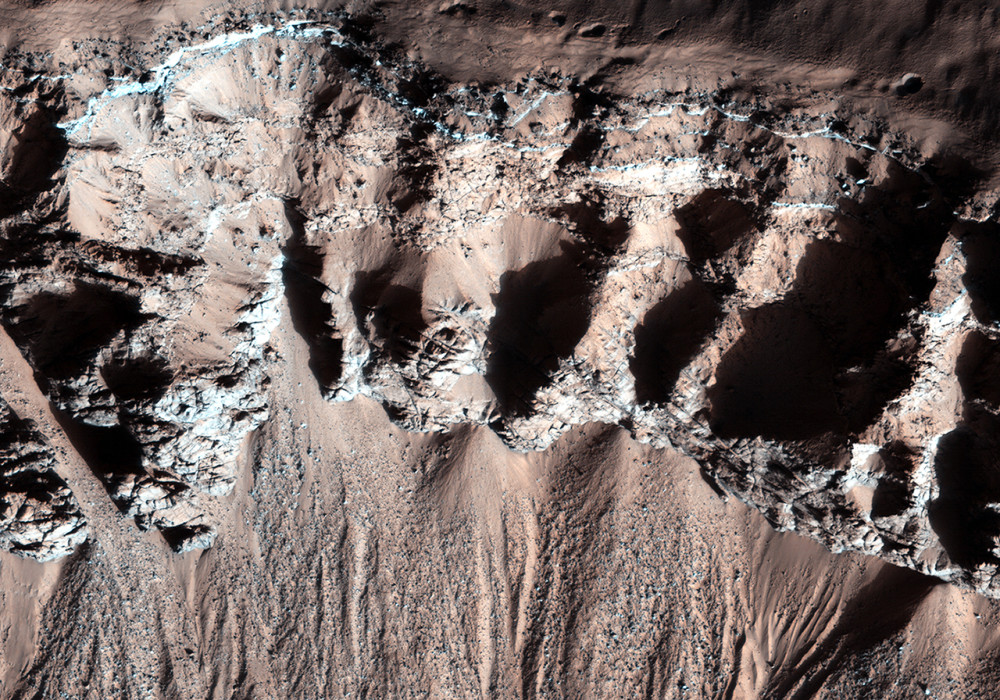