These strange features in Syria Planum are still being widely debated. They have the same general form as transverse aeolian ridges (TARs) elsewhere on Mars; windblown deposits that are common in the Martian tropics. Their height and spacing are similar to the more familiar looking TARs in other places, and they are similarly bright. Unless Nature is perverse, they were both made by the same process.

Yet the TARs here in Syria Planum appear different than typical TARs elsewhere on the planet. They have blunt edges, in contrast to the tapering ends of typical TARs. The ridge crests are serrated, unlike the smooth crests of most TARs. They are layered on their upwind faces and scoured on the downwind sides, whereas TARs are usually smooth and symmetric. Why are these TARs bizarre?

A possible answer is that the features here in Syria Planum are at a different stage of evolution than TARs elsewhere, and are either younger or older than typical TARs. We can look at an enhanced color cutout to see whether this can be the case.

Our cutout covers the width of the color strip (1 kilometer) and is centered on a bare patch in a field of bright TARs. The illumination direction is from the top left, and the wind direction is from top to bottom. At first glance, these TARs look like they could be old, degraded versions of the TARs with which we are familiar. However, erosion tends to smooth things out and not create sharp edges where none existed previously. More likely, we are seeing TARs in the process of formation. The distinctive features of the TARs in Syria Planum — the blunt edges, serrated ridges, and the asymmetric appearance of the surface — are features that are more easily removed than created by erosion. 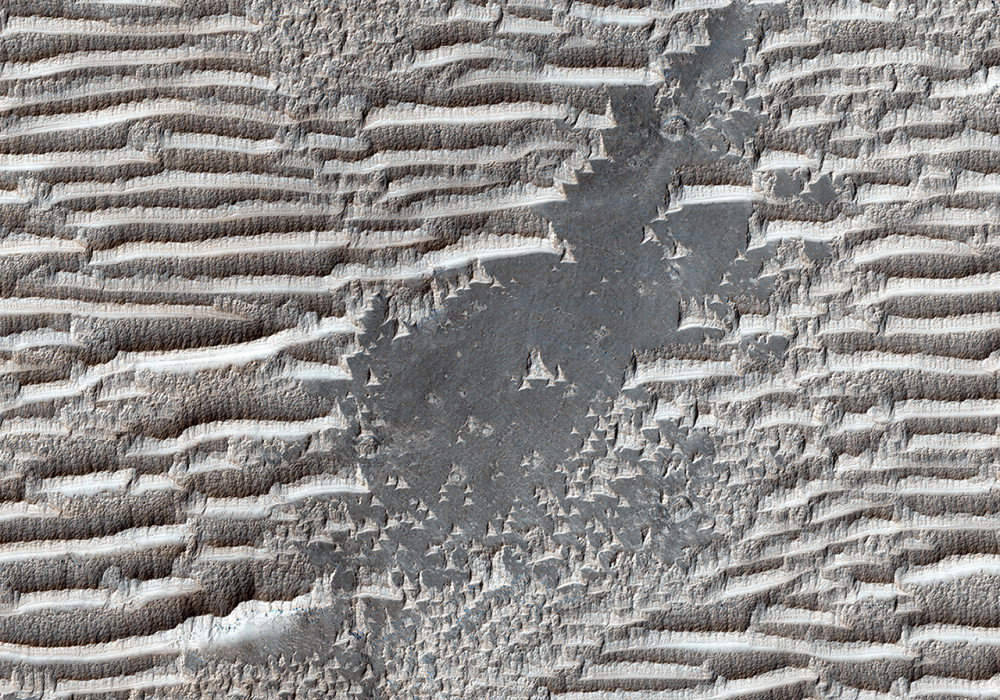