The MRO Context Imager (CTX) team has been discovering many new impact events on Mars, and then they request HiRISE follow-up imaging to confirm an impact origin and to identify and measure the craters.

Crater clusters are common as these small (typically less than 1 meter diameter) objects break up in the thin Martian air and separate a little bit to make crater clusters up to a few hundred meters wide. The example shown here is the result of an impact that occurred between May 2003 and September 2007. It was first discovered as a dark spot in a CTX image acquired in March 2008, but later found to be partly visible at the very edge of a CTX image acquired in September 2007.

A dark spot is not present in the previous image of this location with sufficient resolution to have detected it, acquired by the visible THEMIS camera on Mars Odyssey in May 2003. Thus the impact might have formed anytime between May 2003 and September 2007. The dark markings are created by removing or disturbing the surficial dust cover, and so far new impact sites have been discovered only in dust-covered regions of Mars.

Although small Martian crater clusters are common, this example is unusual because there is a dark line between the two largest craters. We hypothesize that atmospheric breakup coincidentally made two nearly equal-size objects that impacted close together in space and time so the air blasts interacted with each other to disturb the dust along this line.

Hundreds of these small objects (mostly asteroid fragments) impact Mars per year. A comparable number of small objects impact Earth each year, but explode in the upper reaches of our atmosphere and have no effect on the surface, fortunately for those of us who live here. 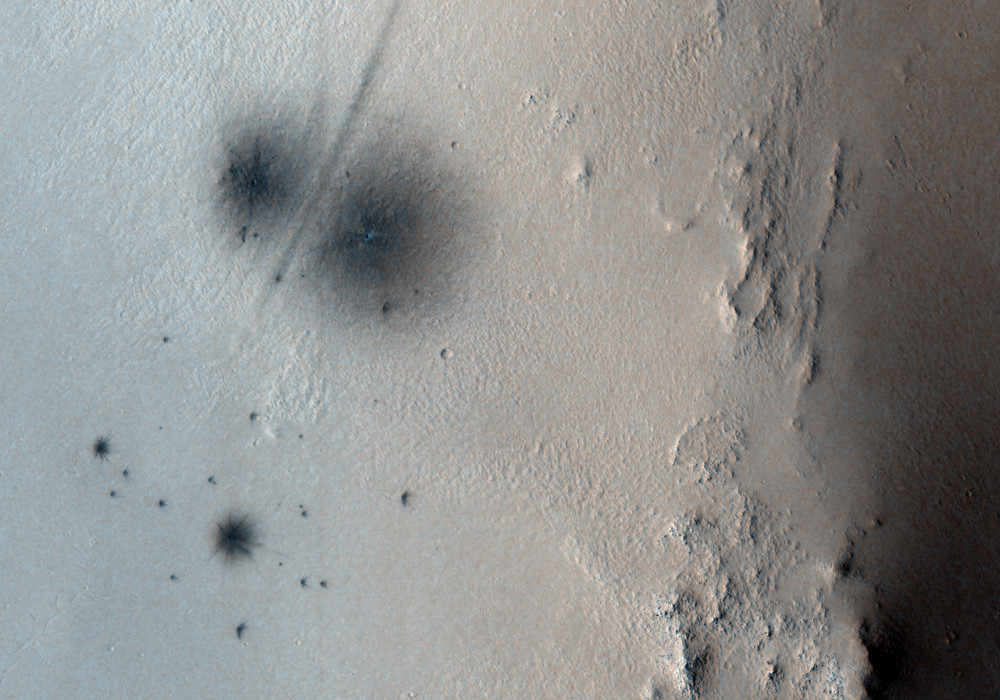