This image shows curious bright deposits in Syria Planum, a high elevation region near the summit of the Tharsis rise.

Syria Planum has a history of surface changes documented in telescopic and low resolution orbital observations since the Viking era. The surface changes result from the relentless deposition and removal of bright dust, as the dust is transported by winds blowing from north to south across the rocky dark surface.

Isolated patches where thick dust deposits have accumulated can be identified in THEMIS night-time infrared observations . The dust deposits are cooler (darker) than the rocky surface both in daytime and at night. Our HiRISE image was centered on one of these cold spots to observe the interaction of the dust deposits with local topography.

Examining the image shows that the dust here has accumulated into linear arrays of broken ridges spaced about 50 meters apart, and extending from tens to hundreds of meters in length. Dust deposits are visible along the rim of the impact crater but much of the crater’s ejecta deposits are strangely dust free.

At full resolution , the ridges appear to have a morphology that is clearly distinct from sand dunes and bright transverse aeolian ridges common elsewhere on Mars. Their steep faces are on the upwind side (in the present day wind regime), opposite to the sand dunes. The ridge crests are crenulated, suggesting that the deposits are currently being eroded by the wind. Fine layering is visible in the deposits, possibly indicating an alternation of dust and sand deposition.

Deposits such as these hint that while modern Mars is relatively benign, the surface of the planet was battered by much more ferocious winds in the recent past, perhaps during periods of high obliquity. 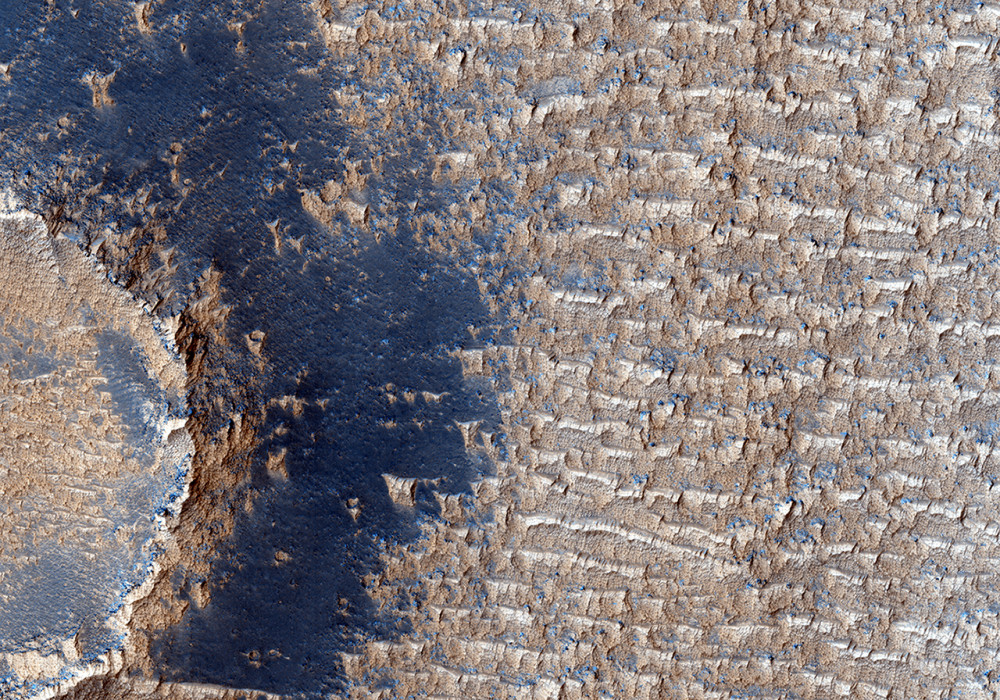