Amazingly, this HiRISE image has captured at least four avalanches, or debris falls, in action.

The image to the left shows the context of where these avalanches occurred, with white boxes indicating the locations of the more detailed image portions shown to the right (all images are false color). Material, likely including fine-grained ice and dust and possibly including large blocks, has detached from a towering cliff and cascaded to the gentler slopes below. The occurrence of the avalanches is spectacularly revealed by the accompanying clouds of fine material that continue to settle out of the air. The largest cloud (upper images) traces the path of the debris as it fell down the slope, hit the lower slope, and continues downhill, forming a billowing cloud front. This cloud is about 180 meters (590 feet) across and extends about 190 m (625 ft) from the base of the steep cliff. Shadows to the lower left of each cloud illustrate further that these are three dimensional features hanging in the air in front of the cliff face, and not markings on the ground (sun is from the upper right).

Cameras orbiting Mars have taken thousands of images that have enabled scientists to put together pieces of Mars geologic history. However, most of them reveal landscapes that havent changed much in millions of years. Some images taken at different times of year do show seasonal changes from one image to the next; however, it is extremely rare to catch such a dramatic event in action. (Another, unrelated, active process that has been captured by Mars cameras are dust devils.) Observing currently active processes is often a useful tool in unlocking puzzles of the past for scientists studying the Earth. Working from primarily still images, it is harder for scientists studying Mars to rely on this tool. The HiRISE image of avalanching debris is a very rare opportunity to directly do so.

The scarp in this image is on the edge of the dome of layered deposits centered on Mars north pole. From top to bottom this impressive cliff is over 700 m (2300 ft) tall and reaches slopes over 60 degrees. The top part of the scarp, to the left of the images, is still covered with bright (white) carbon dioxide frost which is disappearing from the polar regions as spring progresses. The upper mid-toned (pinkish-brownish) section is composed of layers (difficult to see here) that are mostly ice with varying amounts of dust. The darkest deposits below form more gentle slopes, less than 20 degrees, and are mainly composed of two materials: mid-toned layers, possibly ice-rich, that form small shelves, and more mobile, widespread, sand-sized dark material. The wavy forms on the flatter areas to the right are dunes.

The upper, steepest section, which appears highly fractured due to blocks pulling away from the wall, is the likely source zone for the falls. The precise trigger mechanism is not yet known, although the disappearance of the carbon dioxide frost, the expansion and contraction of the ice in response to temperature differences, a nearby Mars-quake or meteorite impact, and vibrations caused by the first fall in the area, are all possible contributors.

By comparing images taken before the fall (such as PSP_007140_2640 ) and after the fall, we may be able to see where material has disappeared from the steep scarp and where it has appeared on the gentler slopes below, possibly as larger blocks, diffuse streaks, or other debris deposits. By imaging this scarp throughout the polar summer, we may be able to determine how much material falls over a given time period. These observations will help determine how much, and at what rate, ice is being eroded from the cliff. Understanding the processes and rates of erosion also help determine how the polar landscape has evolved, and help reveal how volatiles, such as water and carbon dioxide ices and gases, move around Mars.

The precise composition of the ice-dust mixture making up layers in the upper, steepest section of scarp is unknown. However, detailed measurements of the volume of material removed, the configuration of the source area, and the steepness of the slope can be used to estimate physical properties of the material that may relate to composition. 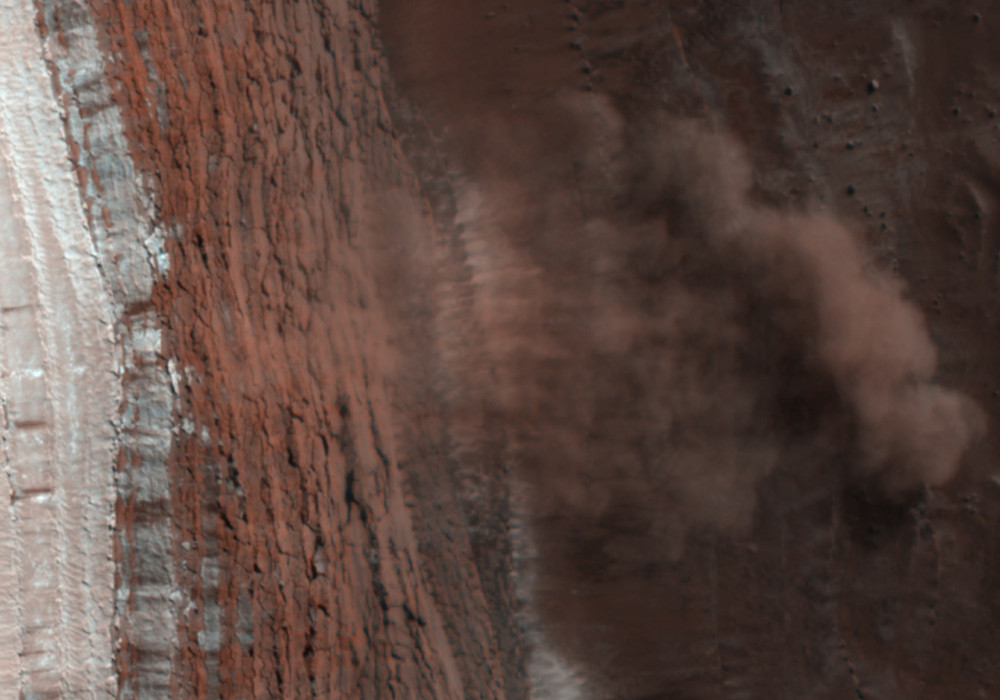