This observation shows lightly cratered plains in Elysium Planitia, which is a low-lying area located in the equatorial region of Mars. Part of an extensional (normal) fault system known as the Cerberus Fossae runs through the center of this image.

Elsewhere in Elysium Planitia, the Cerberus Fossae acted as a fissure-vent for erupting flood lavas, but here the geological activity appears to have been predominantly tectonic. Nonetheless, the raised, lobate (tongue-shaped) margin of an ancient lava flow is faintly discernible in the southern part of the image.

Near the center of the image, a few relatively deep depressions, partly filled with dark sand, are visible in the Cerberus Fossae. These are pit craters formed by collapse as normal faulting progressed. The largest pit crater is about 110 meters (360 feet) wide and about 300 meters (980 feet) long. Steep scarps along the perimeters of the pit craters and the linear margins of the Cerberus Fossae provide a cross-sectional view of the near-surface strata. The exposed material is rocky and has the tendency to break into large boulders that tumble downhill as erosion widens the troughs and depressions. A few low hills appear in the northern half of the image; dark streaks etch their flanks. These dark slope streaks formed when small avalanches removed a surface layer of bright dust, exposing darker underlying materials.

The different shades of the streaks may reflect their relative ages, with darker slope streaks being fresher features.
Written by: Windy Jaeger   (27 December 2007) 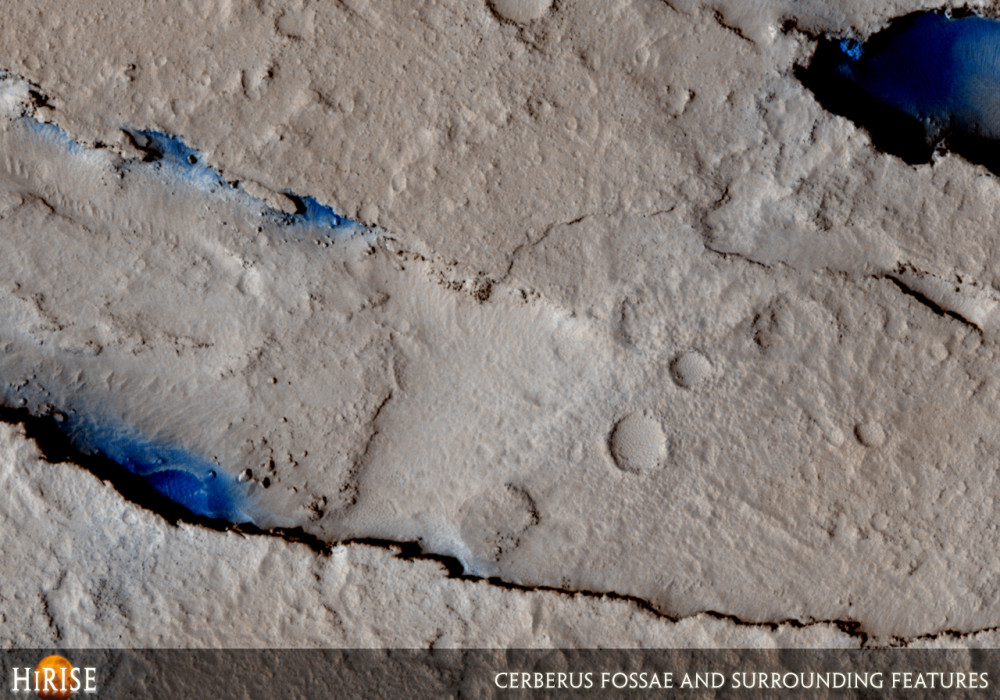