This image shows a part of the Cerberus Fossae, a system of aligned fissures east of Elysium.

The fissures were probably the source of floods of both water and lava. The most recent event was a massive outpouring of basaltic lava (a fluid-type of lava like that commonly erupted by Kilauea in Hawaii), which produced a host of volcanic features in the region, as described by Jaeger et al. (2007).

Here, as at other locations, the fossae appear a striking blue in HiRISE false color . Blue tones are usually associated with basaltic rock. The blue ripples found on the trough floor could be wind-blown sand comprised of fine fragments of basalt. The upper plains are a relatively bland tone, perhaps due to a thin coating of dust; however, impact craters in the image also show bluish boulders and ripples, indicating that they have excavated the same basaltic rock layers cut by the fossae. This is typical of the region, as floods of lava coat much of the area.

The mesas of older rock just north of the fissures are remnants of a former surface, now eroded. The surrounding region has many knobs and larger protruding topography, which may be remnants of the same materials. The topmost layer in each mesa is very resistant to weathering, as in places it actually overhangs the lower rocks. This cap layer could be solidified lava, although it appears somewhat bland in color.

Although the mesa is clearly eroded and the cap rock breaks up into boulders, few rocks are visible at the bottom of the slope. The lava plains may have buried the former basal slope, or debris may have been swept away by lava or floodwater, that could also have contributed to eroding the mesa. 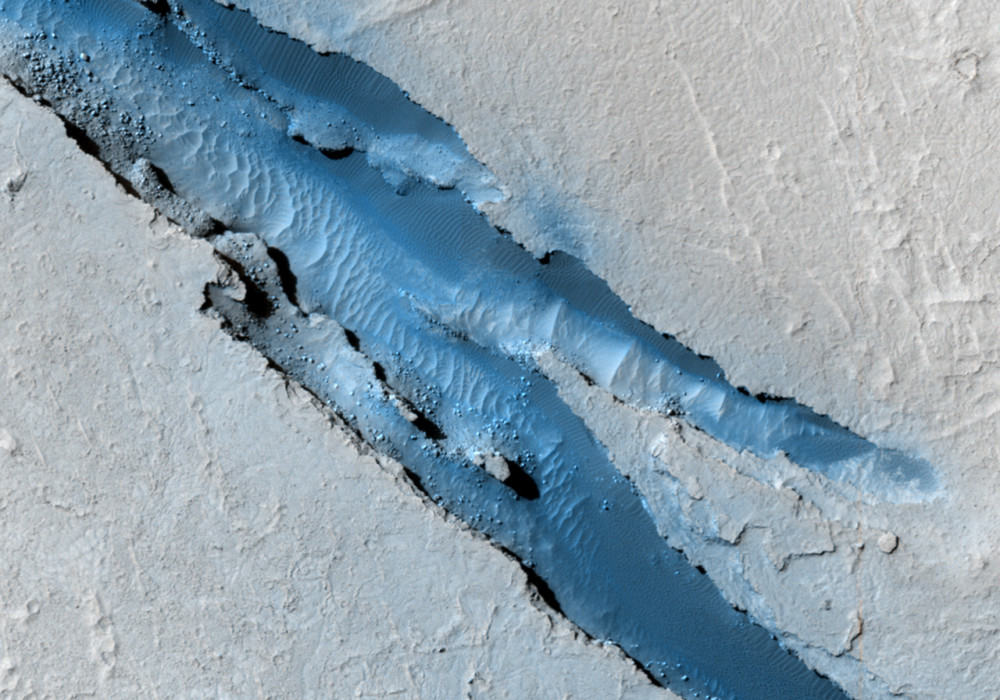