Located near the northern end of the Tharsis rise at a moderate elevation (1800 meters above datum), the site is in a region of high albedo and low thermal inertia that suggest a thick mantle of dust. The first subimage shows some of the changes that have occurred since the site was last imaged in January, 2009 ( ESP_011465_2075 ). Bright dust has been scoured from the surface by strong southerly winds (blowing from the top right in these unprojected images). Bright streaks trail downwind from impact craters, protected from the wind in the lee of the crater rims. Sharp dark streaks edged upwind as the dust was stripped away. At least two different episodes of erosion with slightly different wind directions can be inferred from the orientations of the dark streaks. Yet another wind direction is indicated by the few dune-like ripples that can be seen in the floor of the valley. These features were shaped by much older winds that were probably controlled by local topography.

The second subimage shows the second erosion process, the tracks of dust-devils across the newly cleaned surface (just south of the first subimage). What makes these tracks interesting is that they are bright! Most dust-devil tracks on Mars are dark, forming when a whirlwind lifts bright dust off the surface and exposes a darker substrate. These tracks were neither visible in the earlier HiRISE image, nor in an earlier image ( PSP_002222_2075 ) acquired in January, 2007. The cause of the bright tracks is unclear.

Bright dust-devil tracks were also spotted by the Mars Orbital Camera in southern Schiaparelli Crater, a region also dominated at the time by wind streaks. One way to make bright tracks would be to excavate through dark material (such as a lag of basaltic sand) to a brighter substrate. Another possibility is that the dust-devils stir up the remaining pockets of bright dust that are hiding from the prevailing winds in the shelter of topographic obstacles. 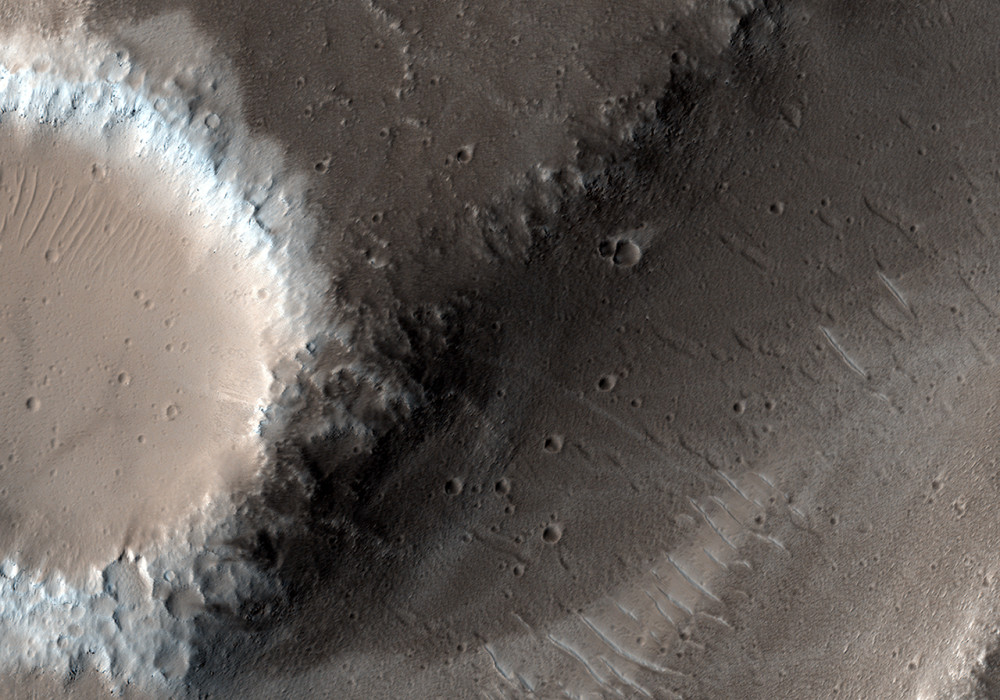