The north polar layered deposits are layers of dusty ice up to 3 kilometers (2 miles) thick and approximately 1000 kilometers (620 miles) in diameter. We can see the layers exposed on the walls of troughs and scarps cut into the deposits, such as the trough wall imaged here.

The bright region at the top is the flat surface above the trough wall; it is higher than the terrain underneath. The wall exposing these layers has a vertical relief of about 600 meters (1970 feet).

It is thought that the north polar layered deposits likely formed recently (i.e., millions of years ago) as rhythmic variations in Mars’ orbit changed the distribution of water ice around the planet. As ice moved to and from the polar region in response to a changing climate, layers of ice and dust built up at the poles. By studying the history of these deposits, we hope to understand how the Martian climate has changed. This is similar to terrestrial scientists studying ice cores from Antarctica and Greenland to understand how Earth’s climate has changed in the last tens of thousands of years.

Three things are immediately apparent about the layers exposed on this trough face. First, individual layers have different surface textures. Some scientists think that changing surface textures reflect changing physical properties (such as dust content or ice grain size) of the underlying layer, and looking for patterns in the sequence of layer textures can tell us about patterns in the climate in which a layer formed.

Second, there are several unconformities, or places where one layer is interrupted and overlain by another layer. These unconformities are due to periods where layers were eroded or removed, followed by times when new layers were deposited. Mapping the locations of unconformities can tell us how the deposit shrank and grew over time, and tell us where large changes in climate occurred, causing water ice to be removed from the polar regions.

Finally, the dark and bright streaks are due to recent winds blowing surface frost around, and can tell us about wind patterns in the current polar climate. 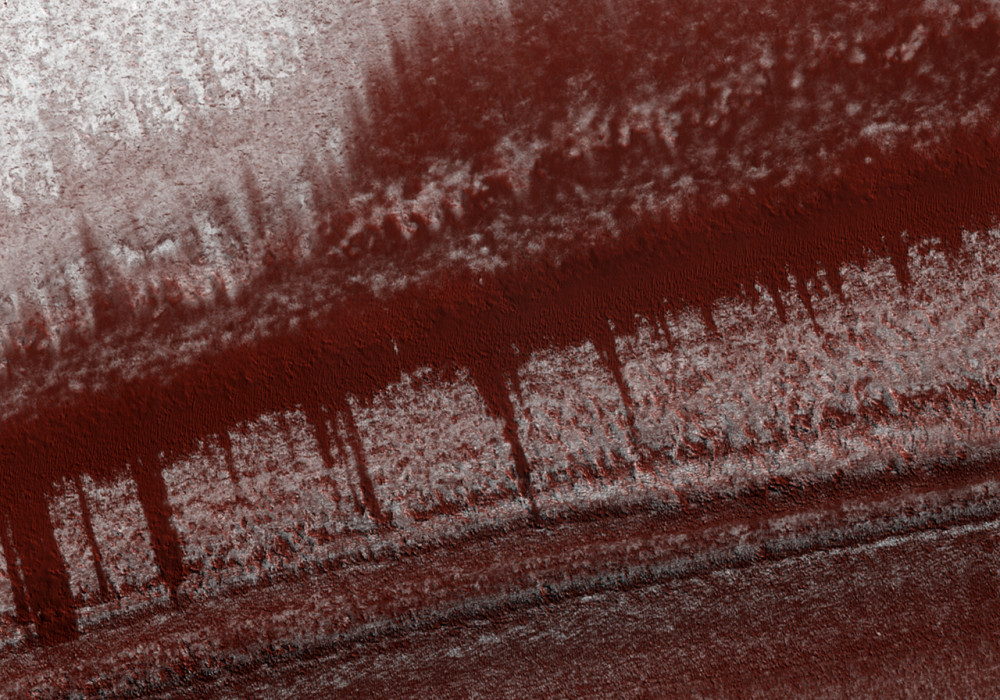