This image shows a number of unusual, quasi-circular structures from 300 to 600 meters in diameter that apparently formed within bright flows in Meridiani Planum. The strange structures were observed earlier in MOC image E12-01295. They are located near the equator, about 300 kilometers West of the MER rover Opportunity.

New details can be seen in the HiRISE image that yield clues to the origin of these mysterious features. The dark rings seen within the concentric structures appear rougher than their surroundings. The bright material in which they formed is densely fractured, suggesting that it is quite brittle. Several small impact craters found within the bright unit produced sprays of dark ejecta, suggesting that the bright surface layer may be only a few meters thick. A compositional and morphological boundary separates the contorted central region of the unit from the smooth margins .

A full interpretation awaits detailed analysis, but these observations suggest that the lobate bright unit may have been produced by an ancient flow of water-saturated fluvial sediments. The circular structures within the flow could have formed by desiccation, as the sediments dried out and contracted, similar to mud cracks but on a much larger scale. Or they may have formed by a process of diapirism, if a solid crust formed on the surface of the drying sediments that was denser than the water-saturated slurry below. On Earth, slurries of sand and water that are pressurized by the weight of the overburden can rise to the surface to form “injectites,” eruptions of sand and water that can reach heights of hundreds of meters. Whether they were formed by desiccation or injection, these unusual features record a unique moment in the distant past of Mars. 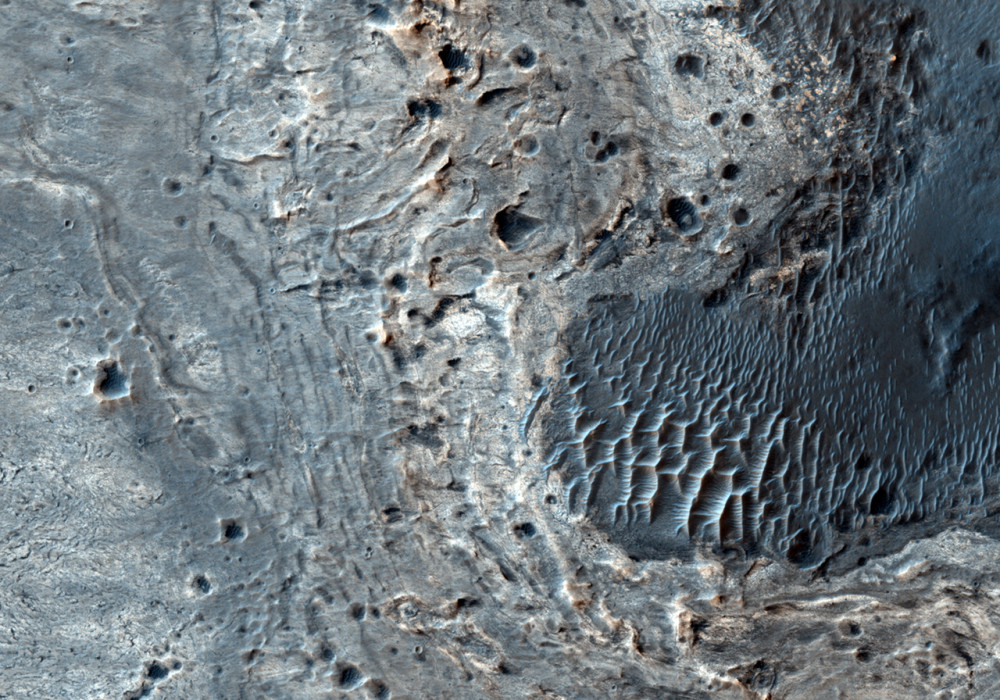