Contact between the Medusae Fossae Formation and Amazonis Planitia

Amazonis Planitia (seen in the northern half of this image) is one of the very flattest places on Mars. It is covered by vast floods of lava that have left a smooth lava plain.

The Medusae Fossae formation (seen in the southern half of this image) is a series of young wind-eroded deposits whose origin continues to be debated. It is generally thought to be composed of volcanic ash, perhaps like pumice on Earth. However, some scientists hypothesize that it is an equatorial ice-rich deposit.

In this image, it can be clearly seen that the Medusae Fossae formation is being eroded off of the Amazonis lavas. Pristine lava features can be seen emerging on either side of the ridges of wind eroding material. The thin wiggly ridges on the lava plains are “pressure ridges” formed by bucking of the lava crust while it flowed. The small cones, a few hundred meters or yards in diameter, that dot the lava plains formed when water underneath the lava turned to steam and exploded through the lava flow.

Today, these cones are still partly filled with Medusae Fossae formation materials. At least in this location, HiRISE finds no evidence for ice at or near the surface of the Medusae Fossae formation. Instead, the wind carved slopes are covered with dark streaks that formed as dry avalanches of dust.Written by: Laszlo P. Keszthelyi   (7 January 2008) 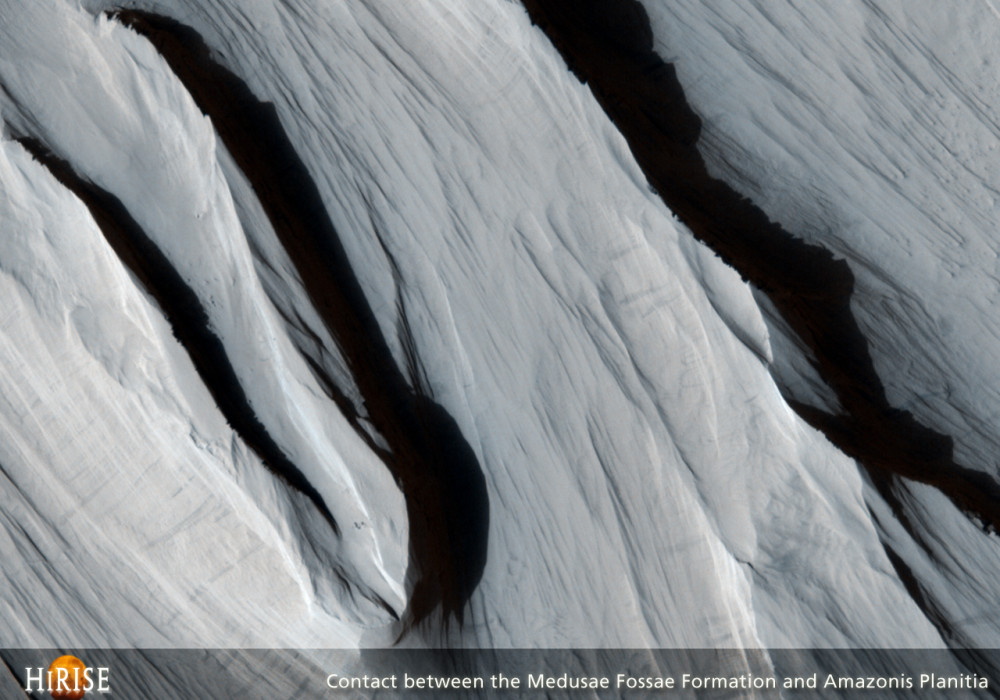