This image shows two landforms that appear similar, but are the result of two very different geologic processes.

These two depressions are craters. The smaller, rounder crater formed when an asteroid collided with Mars. This impact blasted out the pre-existing rocks, forming this quasi-circular crater.

The larger, more irregular-shaped crater is a pit crater. These types of craters form through collapse of the ground surface into large underground voids. In this region of Mars, these underground voids are likely caused by the movement of magma (molten rock) through the subsurface. As the magma moves underground, it forces the rock apart and forms large “caverns.” These voids are structurally unstable and can lead to collapse of the overlying rock, forming pit craters at the surface.

Impact craters are distinguished from pit craters by the presence of a raised rim. Rock blasted out during the impact falls back to the ground and accumulates near the crater, forming this raised rim. Upward warping of the ground during the impact process also contributes to the raised appearance of the crater rim. Since pit craters form through collapse, their rims are at the same level, or perhaps slightly lower, than surrounding ground surface.

The impact crater has a bright streak extending southeast (toward the lower right ). The bright material is dust, deposited downwind of the crater by prevailing winds. Zooming into the streak, small bedforms, presumably composed of dust or dust aggregates, are visible. Similar features are seen in other dusty regions of Mars.
Written by: chriso   (19 August 2008) 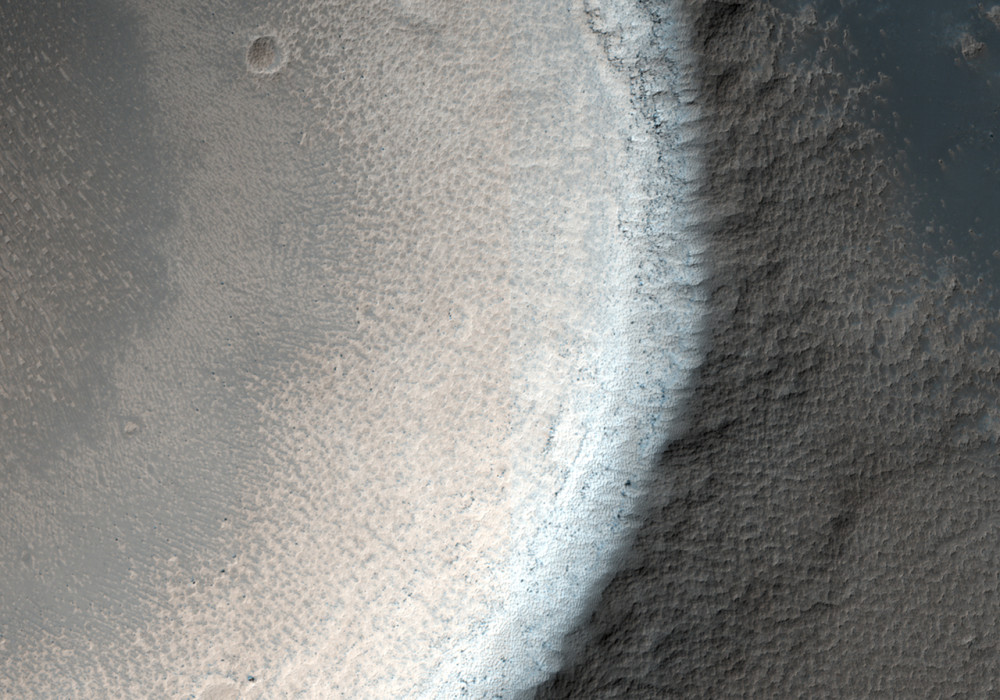