Craters on an Ice-Rich Debris Apron

This observation shows a swath of a debris apron east of Hellas Basin. Features like this are often found surrounding isolated mountains in this area. Material flowed down off of the top of the mountain and settled in an area around its base. The bottom of the image (to the south) shows the base of the mountain, where material is sliding off and piling up into ridges . The top of the image (to the north) shows the lobate edge of the apron, where it stopped flowing.

Recently, the SHARAD (Shallow ground-penetrating radar) instrument (also on board the Mars Reconnaissance Orbiter with HiRISE) measured large amounts of water ice mixed into this and other debris aprons. The water ice is what gives the apron its unique texture, which is especially clear at HiRISE’s high resolution. Parallel ridges and grooves indicate material has moved slowly while remaining solid – a process called “creep.” Pits and buttes may have formed when the dust- and debris-covered ice cracked and sublimated (went directly from a solid to a gas phase).

We can also use this HiRISE image to study the small impact craters found in these areas. Debris aprons like this one have fewer craters than their surroundings. Because impacts generally occur indiscriminately over all of Mars, this means that either the debris apron is younger than its surroundings, or some process is erasing craters on the apron – a process which is not occurring as rapidly on the surrounding plains.

The fact that this apron is rich in water ice is a clue to what is happening. Another clue is the craters on the apron themselves: they have a different appearance than most craters. Some of these degraded craters are “inverted” (higher in the middle than at the edges, which is the opposite of normal craters).

Craters like this have been modified, so we can tell the surface has been active at some time since the impact that formed the crater. For this reason we can’t estimate the age of the flow by counting craters, like we are be able to do on some surfaces. However, we can use these craters to study the processes that are actively modifying the apron material. 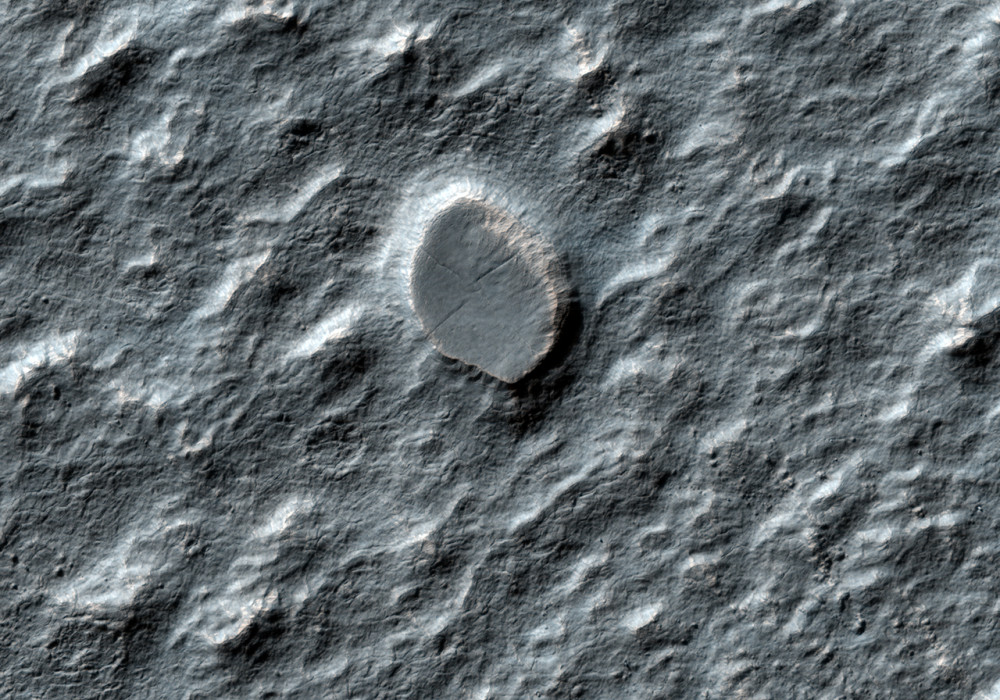