Curiosity on the Naukluft Plateau

HiRISE periodically acquires images of the two working rovers on Mars, Opportunity (Mars Exploration Rover) and Curiosity (Mars Science Laboratory). Although earlier pictures are generally sufficient for mapping the terrain and topography, new images allow scientists and engineers to study rover tracks and their covering with dust over time.

The ability to keep track of the rovers’ progress and seeing their current location on Mars in the HiRISE images is of great interest to the public. In the case of Curiosity, new images allow the tracking of active sand dunes currently in the vicinity of the rover. This dune field, informally named the “ Bagnold Dunes” after the pioneering British aeolian scientist Ralph Bagnold (1896-1990), has recently been investigated by Curiosity .

Curiosity is currently located on the Naukluft Plateau just north of the Bagnold Dune field. Its position was captured by HiRISE on 25 March 2016 (MSL Sol 1291. Views from the surface at this location are available here and here .) The rover is within sandstone outcrops informally named the “Stimson Formation.” There are no obvious rover tracks in the HiRISE views indicating that this bedrock contains little dust that otherwise could be disturbed by the rover wheels as has been seen earlier in Curiosity’s traverse .

By comparing a portion of this image to an earlier view, we can see subtle changes in the margin of “Namib dune” . These changes result from the wind redistributing sand, including avalanching of the Namib dune slipface, over the bright bedrock. Note that the rover is in front of the dune in the December image (see surface images here ). 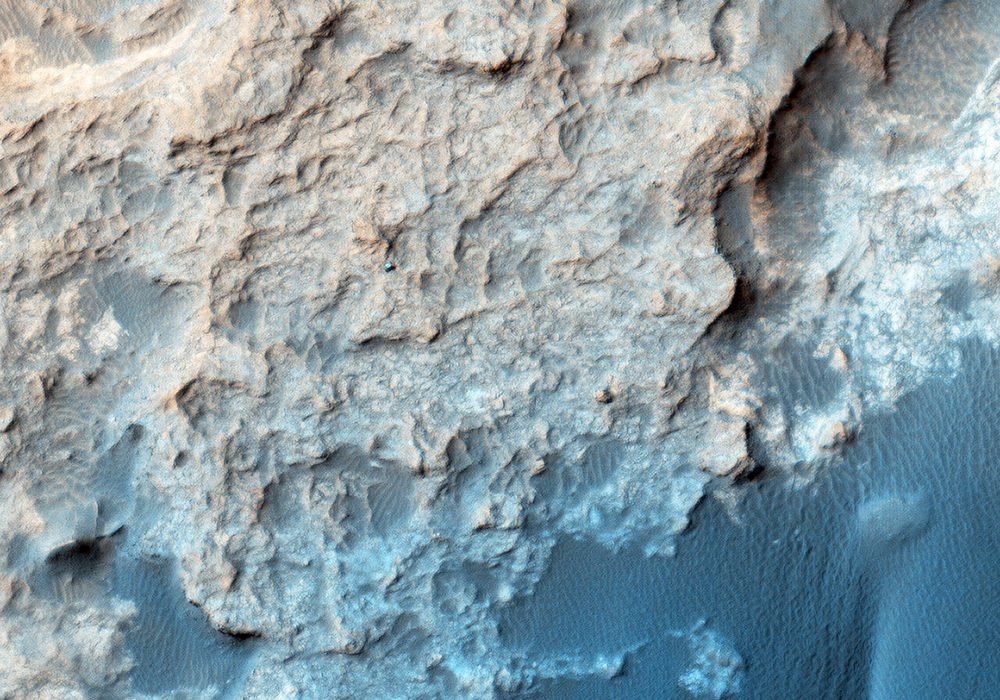