This image shows an arcuate ridge in Terra Meridiani. The ridge is most likely a former streambed, now exposed in inverted relief; the wandering path is not expected for an exhumed fault or volcanic dyke. The stream that formed this ridge must have been ancient as the ridge is buried by brighter rocks, which are themselves very old, having been thickly deposited and then heavily eroded.

The Mars Exploration Rover Opportunity landed in the same region of Mars, and the rocks it has examined are likely part of a sequence similar to that exposed here. The rocks exposed at the Opportunity landing site are mostly aeolian (wind-deposited) sandstone, but show evidence of past water, reaching the surface at times. Opportunity has access to only a few meters of a stack of sediments that is hundreds of meters thick.

Since water was present at times at the Opportunity landing site, surface water elsewhere in the sequence of sediments is perhaps not too surprising. However, evidence like this may indicate that sediments were deposited by a broader range of processes than just those inferred at the Opportunity site. This is important for unraveling the entire history of the region.

A stream channel could become inverted in several ways. Chemicals precipitating from the water could bind the streambed together, lava could fill the channel, or the bed could contain large boulders. In each case, the relatively resistant material of the stream channel could remain as the surrounding rock eroded. Here, the ridge is distant from any volcanic vent, and appears fractured, particularly in the southern portion. This indicates that the ridge material is consolidated and has some strength. Thus, the most likely mechanism for formation of this ridge is deposition of a chemical “cement” which hardened the streambed rock.

The plains surrounding the ridge are also fractured, indicating some degree of consolidation. These cracks could form by desiccation (water loss) from wet sediment or tensile fracturing as the weight of overlying rocks was removed. Cracks like this can also form in permafrost due to seasonal temperature changes; ground ice is unlikely this close to the equator, but it is possible that the cracks are a remnant of different climate conditions from the past. 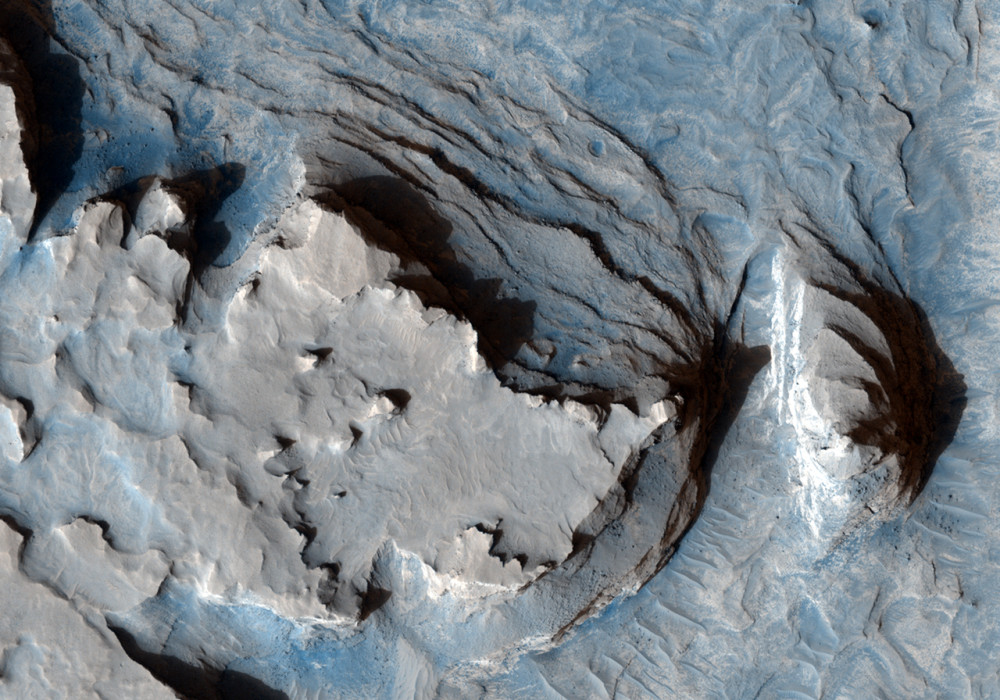