The MER Opportunity rover is currently exploring Meridiani, but is located about 500 kilometers to the west-southwest from here (as of 2007).

There are three broad classes of terrain in this image. The regular spacing of the dark ridges, with one side of the ridges (in this case generally on the northwest) shallower than the other, indicates that the material is windblown sand deposited in the form of dunes or large ripples.

On the slopes of and in between the dunes/ripples are smaller-scale ripples. The dark tone of the sand and compositional analysis of analogous material by Opportunity indicates a basaltic composition. This is in contrast to most sand on Earth, which is dominated by the mineral quartz.

The basaltic sand here and elsewhere on Mars probably formed from the breakup of volcanic rock via water, wind, impact, volcanic, and maybe other processes. It was then sorted and organized into dunes and ripples by the wind. Two expanses of relatively sand-free terrain are seen in the upper part of the image. The gray material at upper center has a polygonal pattern when viewed at high resolution. The polygons may be fracture (jointing) patterns induced by local stresses in the rock or possibly from desiccation (drying) of the original material that formed the gray unit. This pattern is seen in the hematite-rich rocks at the Opportunity site.

The third terrain is a bright rocky unit at top center of uncertain origin. It is at the base of a cliff, above which is the gray unit. Therefore, the bright material may be older than the gray polygonal unit. Because both units are exposed today, they must have been partially uncovered in the past, with sand recently covering them again in some areas. 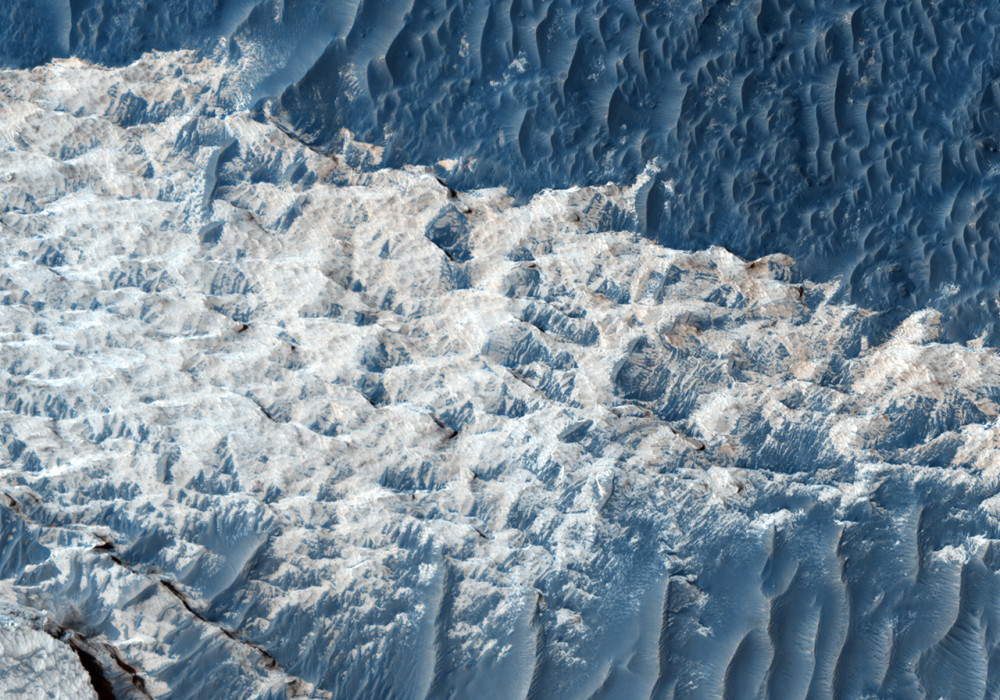