This image covers parts of two different craters, both with gullies in the inner walls. Gullies are a popular target because their formation is still being debated.

The powerful HiRISE camera reveals many details of gullies that have never been seen before. (Searching our catalog for “gully” or “gullies” will bring up many, many more images of gullies!) Some hypotheses about the formation of gullies involve the flow of some amount of liquid (water, brine, or some other substance), and others postulate that gullies could be formed by the downhill movement of dry material such as dust or sand. To further complicate things, different gullies could have formed by different methods.

The many gullies visible in this image look quite different from each other. This subimage from the southwestern part of the crater to the south shows a gully with a smaller alcove (source region at the top) and a deep main channel. The material in the channel is a different color than the alcove, indicating they may contain different minerals or different grain sizes.

Another gully in the north part of the same crater has almost no alcove and very little material deposited at the bottom. However, this gully is marked by a distinct bright-colored deposit along its length. This could be a sign of recent activity where material has moved downhill.

Yet another site nearby within the same crater has multiple overlapping gullies of different types. Most of these have large fan-shaped deposits at the bottom, and a few to the left side of the subimage have bright deposits where new material may have been deposited or exposed. Some of the channels and fans contain ripples; this might be where wind eroded loose material, or it may be a texture that formed as sand or liquid moved down the slope. Some of the gully-like features in this image are more likely dry landslide chutes.

This is also a good example of how we use lower-resolution data from other missions, like this previous MOC image , to target the HiRISE camera. A science team member studied the MOC image, and she decided more could be learned by getting a higher-resolution color picture of this site. Now studying this HiRISE image will teach us more about how gullies form.

For more information about gullies in HiRISE images, see these captions as well as many more images in our catalog : 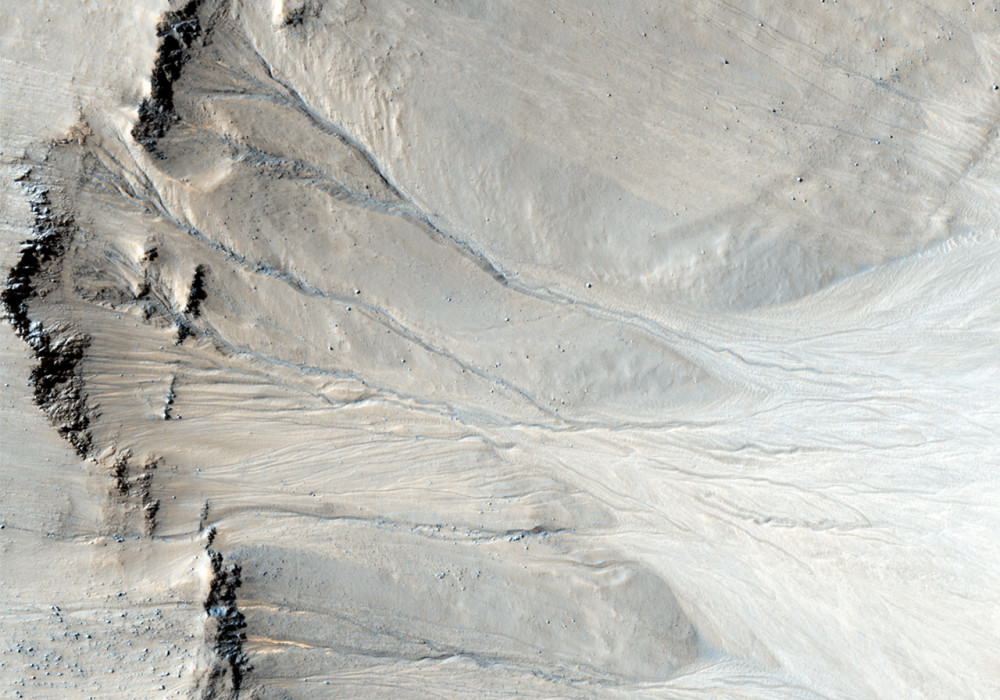