Dunes and Ripples in Valles Marineris

Two types of wind-blown sedimentary deposits are pictured in this scene of the floor of Ius Chasma in the Valles Marineris.

Smaller light toned ridge-like ripples draped over the bright bedrock are visible in this subimage . Long dark sand dunes superpose the small ridges, indicating that the sand dunes formed more recently than the ridges. Earlier observations have shown that the small ridges, known as “transverse aeolian ridges” or TARs, appear to be fixed in place. They are typically found near the equator of Mars, in places where the winds alternate in direction over daily or seasonal cycles.

Detailed investigations by the MER rovers revealed that the TARs were armored by a surface layer of coarse granules left behind after the smaller particles were winnowed away by the wind. These granules are too large to be lifted by the wind and preserve the TARs from further erosion. In contrast, recent HiRISE observations show that many of the dark sand dunes on Mars are actively on the move.

From these facts, we can hypothesize the recent history of the aeolian deposits here in Ius Chasma. Unconsolidated sediments were formed in the canyon by impact fragmentation and erosion of the steep canyon walls. These sediments were eroded and shaped into dunes by the winds that blow up and down the canyon, alternating direction between day and night. Eventually the tireless winds won the battle over sediment supply, and the remaining sediments were sifted into the TARs visible in the image, oriented perpendicular to the length of the canyon (transverse to the winds).

More recently, a fresh supply of sand was introduced into the canyon that the winds have not yet had time to tame. Instead of forming simple crescent dunes, the bidirectional winds have shaped the sand into long linear dunes punctuated by short slip faces. At high resolution , we see that the linear sand dunes are ruffled along their lengths by ripples transverse to the wind directions. Ultimately, most of this sand will be swept away, leaving the TARs trapped behind. 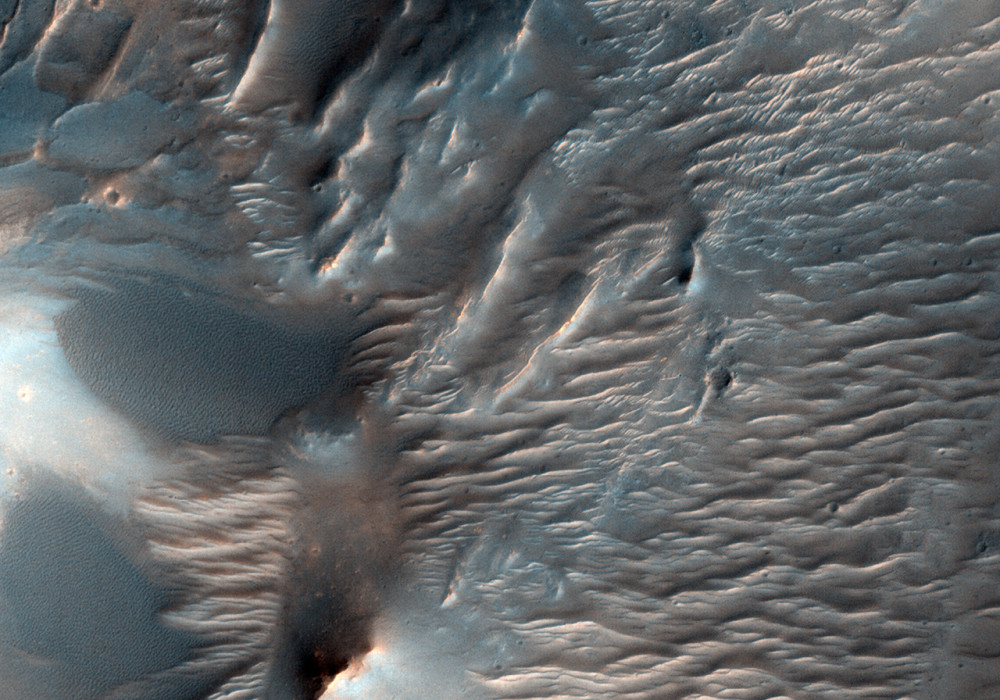