This image covers some high-standing topography just outside the rim of an approximately 30 kilometer diameter impact crater. What formed this hill? Could it be a volcano? That was hypothesized to be the case in a paper published in 2001, and this suggestion was entered to test that idea, perhaps from seeing internal layering exposed by the crater.

This is an example of what we regard as an excellent science justification—following up on a testable hypothesis with specific observational goals. It was entered by blogospherian Emily Lakdawalla of the Planetary Society. If you’re thinking we chose to acquire this image early because we want her to blog nice things about HiRISE and HiWiSH, you’re right! But its also a good suggestion.

So what does the HiRISE image show us? Mostly it shows a dust mantle, hiding the bedrock it was intended to study. The dustiness is especially apparent from the uniformity of the color data. Much of Mars is covered by dust, so we often favor the relatively dust-free patches for HiRISE imaging. (You can usually tell whether a surface is dusty by looking at dust index maps and the THEMIS nighttime IR mosaic.) We hope to get the nighttime IR map entered as a layer of HiWISH to help image suggesters.

The night-IR bright (warm) stuff is rocky or sandy, and dark (cool) stuff is probably dusty. Dust cools off rapidly at night while rocks store and slowly release heat. If the dust is thin, HiRISE images can still show the underlying meter-scale morphology. Maybe someone will want to study the dust-related processes on Mars, which are actually not well understood. Additionally, dusty surfaces are where we can find new impact craters that disturb the dust and make easy-to-see dark spots. We’ll see if Emily finds something interesting in this image.
Written by: Alfred McEwen   (31 March 2010) 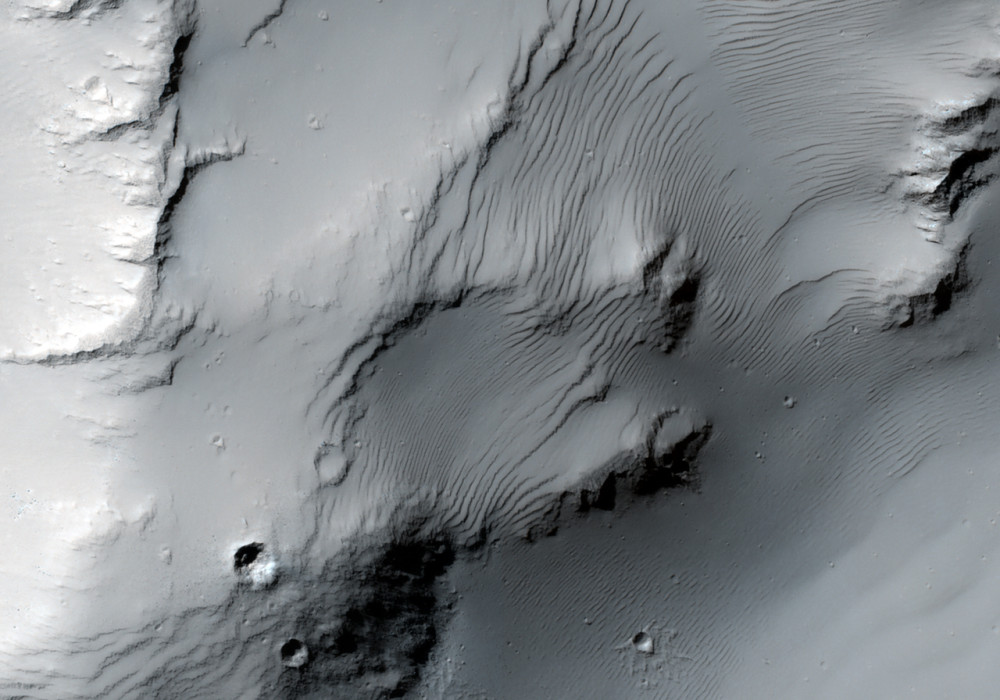