This image shows a steep-sided depression in light-toned, layered rocks in the Valles Marineris canyon system. This formation, known as Ceti Mensa, is located in western Candor Chasma in the northern Valles.

The origin of Ceti Mensa and other layered deposits within the canyons is a source of much debate: proposed interpretations include lake deposits, deposits of volcanic ash, deposits of windblown sand and dust, and glacial deposits. Recent spectral observations by the Mars Express and Mars Reconnaissance Orbiter spacecraft have identified crystalline iron oxides and hydrated magnesium sulfate minerals on Ceti Mensa. These minerals are regarded as indicators of the presence of liquid water during their formation. The hydrated sulfate mineral kieserite, in particular, most commonly forms on Earth by evaporation of brines.

This image gives another clue to the formation of Ceti Mensa. Close-up examination shows fine banding in the layers of Ceti Mensa that is exposed by the ongoing erosion. The banding is produced by alternating bright and dark material. The thickness of the individual bands ranges from a few meters down to the resolution limit of the image, a few tens of centimeters. The bands are parallel, although they appear wavy on the irregular, eroded surface.

The banding visible in this image most closely resembles terrestrial lake deposits and similar rocks formed in aqueous, low energy depositional environments. Structures such as cross-bedding that are hallmarks of wind-deposited sediments are absent, as are cobbles and clasts that are typical of glacial sediments.

If this interpretation is correct, the thickness of Ceti Mensa suggests formation in standing bodies of water that were several kilometers deep. 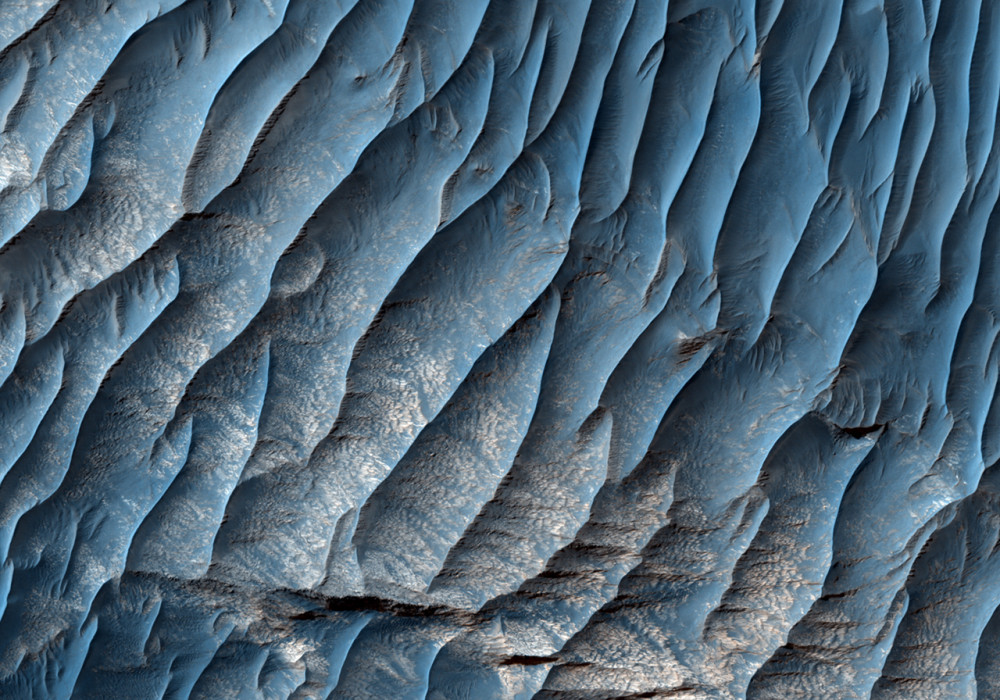