Exposed Fractured Bedrock in the Central Pit of a Crater

This HiRISE image shows the central pit feature of an approximately 20-kilometer diameter complex crater in located at 304.480Â°E, -11.860Â°S, just north of the Valles Marineris .

Here we can observe a partial ring of light-toned, massive and fractured bedrock, which has been exposed by the impact-forming event, and via subsequent erosion that typically obscure the bedrock of complex central features . Features such as this one are of particular interest as they provide scientists with numerous exposures of bedrock that can be readily observed from orbit and originate from the deep Martian subsurface.

Unlike on Earth, plate tectonics do not appear to be active on Mars. Thus, much of the Martian subsurface is not directly observable through uplift, erosion and exposure of mountain chains, which provide the majority of bedrock exposures on Earth. Exposures of subsurface materials generated by these features provides us with some of the only âwindowsâ into the subsurface geology. This makes the study of impact craters an invaluable source of information when trying to understand, not only the impact process, but also the composition and history of Mars.

Although much of what we see here is composed of massive and fractured bedrock, there are zones of rock fragmentation, called “brecciation.” These fragmented rocks (a.k.a., breccias) are best viewed in the eastern portion of the central pit, which was captured in a previous HiRISE image . Additionally, we see some occurrences of impact melt-bearing deposits that surround and coat the bedrock exposed within the central pit. Several dunes are on the surface throughout the central pit and surrounding crater floor.

The mechanisms behind the formation of central features, particularly central pits, are not completely understood. Geologic mapping of these circumferential “mega” blocks of bedrock indicate radial and concentric fracturing that is consistent with deformation through uplift. The exposed bedrock shows well-expressed lineament features that are likely fractures and faults formed during the uplift process. Studies of the bedrock, and such structures in this image, allows us better to understand the formative events and physical processes responsible for their formation. Current research suggests that their formation is the result of some component of uplift followed by collapse. 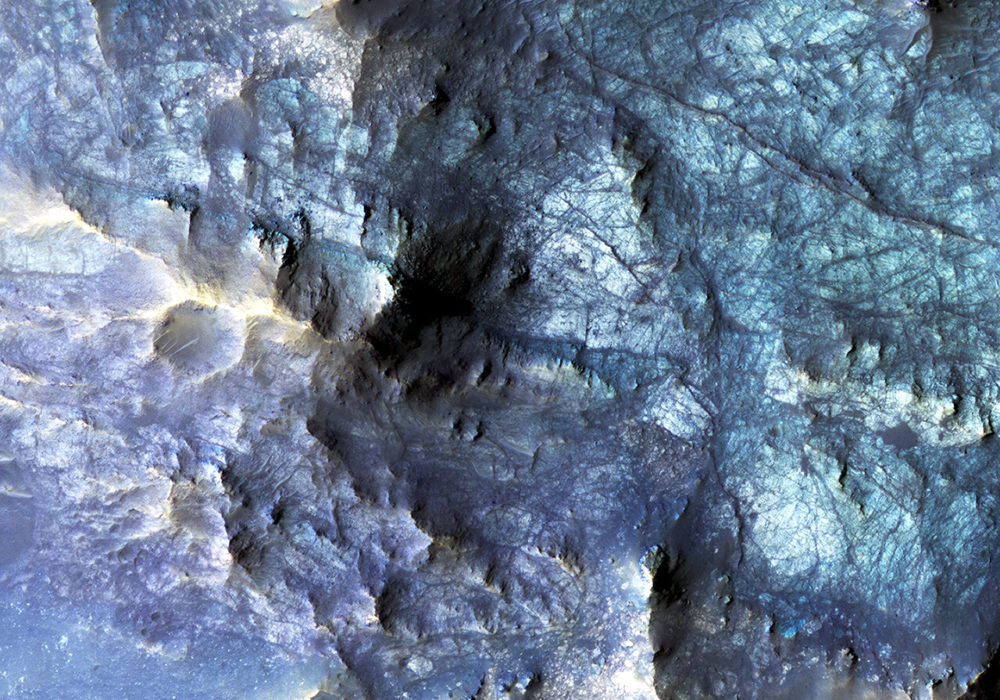