This young impact site was discovered by the MRO CTX Science Team.

A new dark spot appeared in a CTX image from July 2008 that was not seen when the region was previously imaged by the Mars Odyssey THEMIS VIS instrument in November 2004. High resolution imaging by HiRISE in November 2008 ( left panel of the subimage ) confirmed that the dark spot was ejecta from a cluster of craters.

Three large craters ranging from 3 to 5 meters diameter and at least 5 smaller craters make up the cluster pictured. A smaller outlier (approximately 2 meters in diameter, not pictured in the subimage) landed 300 meters away to the Northwest (bottom right in the non-map projected subimages). These craters were likely produced by a single impactor that broke into pieces as it fell through the Martian atmosphere.

The impactor probably approached from the Northwest, judging from the shape of the ejecta pattern and the location of the small outlier. The impacts sprayed the site with dark ejecta excavated from beneath the bright surface. The conspicuous, newly formed feature provides an ideal location to monitor the effects of wind on the modern Martian surface.

HiRISE imaged the site again in September 2010 (right panel of the subimage), after the passage of a full Martian year when the illumination was similar to the previous HiRISE image. By luck, the incidence angle (the zenith angle of the Sun) of the later image was only 0.2 degrees different from that of the earlier image. However, the phase angle (the angle between the Sun, the target, and the camera) was smaller by about 14 degrees as the spacecraft rolled in the opposite direction.

The new picture shows the ejecta pattern apparently faded in comparison to the previous image. The contrast of other features in the scene (such as the hills and boulders at the bottom of the cutout) is similar, but the ejecta from the crater cluster is noticeably brighter in the HiRISE image from 2010. One possibility is that the dark ejecta reflects sunlight differently than the bright surrounding terrain, becoming darker more rapidly as phase angle increases. Another possibility is that the ejecta pattern was mantled by a thin layer of bright dust that settled out of the atmosphere during the 20 month interval between the two images. Further monitoring of this site by HiRISE will help choose between these hypotheses.

This target illustrates how the various instruments on MRO work together. The spatial coverage of HiRISE is too limited to search for new impact craters across the Martian globe. Yet the spatial resolution of HiRISE can be used to verify and study details in sites identified as suspicious by CTX. The complimentary capabilities of the MRO instruments provide a fuller understanding of Mars together than their insights taken separately. 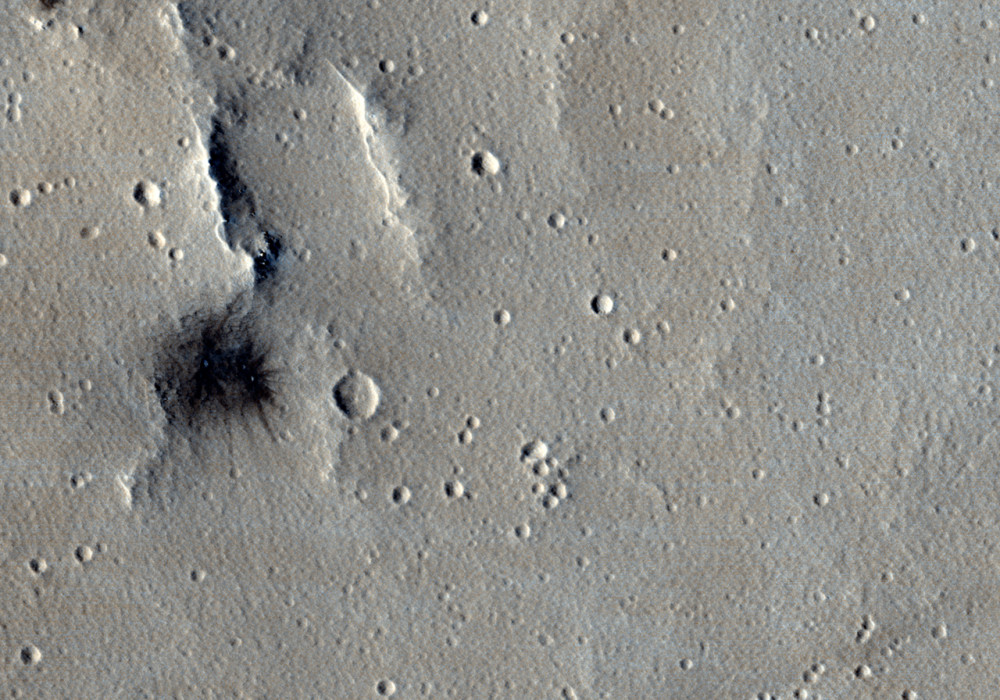