In this composite image , we show a close-up of the tracks, as well as 6 previous HiRISE views acquired since June 2007, shortly after Opportunity’s drive.

The span encompasses over a full Mars year, from southern spring to the following summer. Both the grayscale images at the top of each sequence and the color below show a progressive fading of the tracks over time. The color also shows that the tracks are initially fairly red and become bluer. This is because the weight of the rover pushed dark granules into the relatively bright, red Martian soil. Since then, dark sand has blown out of Victoria and partially covered the tracks, darkening the surface.

AN OBLIQUE VIEW OF VICTORIA CRATER
Victoria Crater was explored by Opportunity rover for more than a Mars year; HiRISE images have supported surface exploration and contributed to joint scientific studies.

HiRISE stereo data were used to measure slopes and help select safe paths for the intrepid rover. The most interesting exposures of geologic strata are in the steep walls of the crater, difficult to image from the overhead perspective of orbiting spacecraft like MRO. However, MRO can point to the sides, and did so in this case to get a better view of layers in the west-facing and sunlit slopes of the crater.

Especially prominent is a bright band near the top of the crater wall, interpreted by some MER scientists as having formed by diagenesis (chemical and physical changes in sediments after deposition). This bright band separates the bedrock from the impact ejecta deposits of Victoria Crater.

The subimage has been rotated so that we are looking east, with MRO pointed 22 degrees east of straight down, so it is comparable to a view from an airplane window. Colors have been enhanced to show subtle differences. 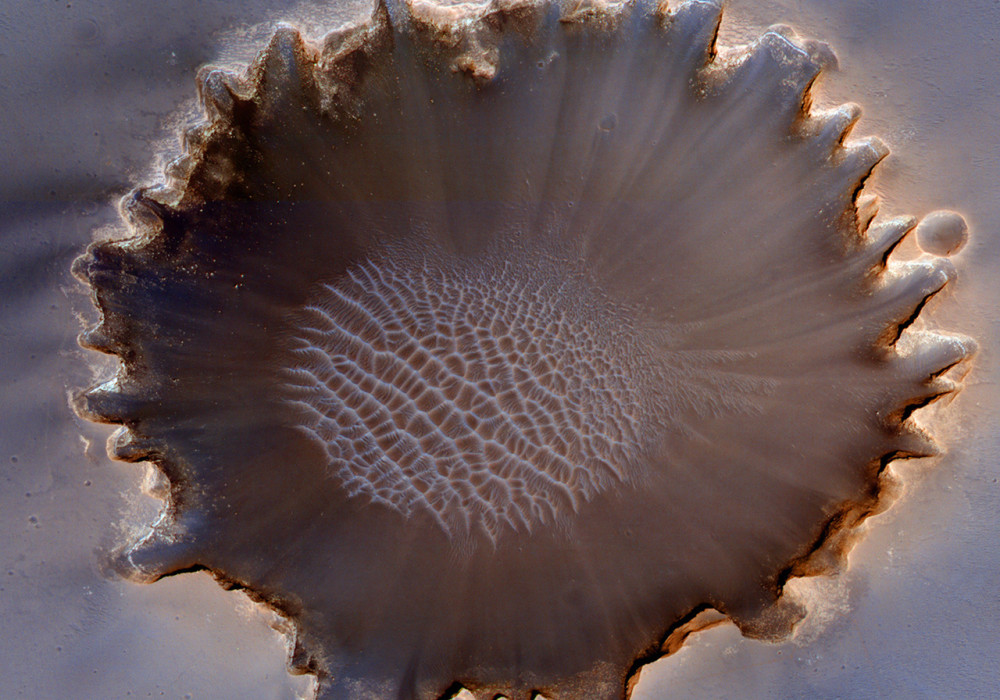