This image spans a section of the south polar layered deposits (SPLD). The SPLD are composed of layers of water ice mixed with impurities (mostly dust). The most similar terrestrial analog to the SPLD are ice sheets, like those covering most of Greenland and Antarctica.

The figure shown here is a cutout of the full observation (1.8 kilometers across, or 1 mile; 1844 x 1078, 6 MB) showing a very interesting and somewhat rare feature: a fault. The fault is the thin, diagonal line that cuts through most of the image, from near the lower left corner to near the upper right corner. On each side of the fault, the layers that cross the fault are slightly off-set from one other; in other words, the layers don’t line-up with each other anymore. The relationship between the angles at which the layers and fault are exposed and the movement along the fault is complex, but, in general, the layers on the left side of the fault are slightly lower than those on the right.

Faults are created when rock (or, in this case, water ice) breaks due to some outside force and rocks (or ice) along either side of that break move in opposite directions. One of the most famous faults on Earth is the San Andreas Fault in California. There is a crack between the floor of the Pacific Ocean, plus a little bit of the California and Mexico coastline, and the rest of North America; the Pacific Ocean floor is moving northward along that crack, but North America is moving southward. Because the two sides are grinding against each other, they sometime stick together and then move again in jerky fashion, much like the way if you try to rub pieces of rough sand paper together. When movement along the fault occurs after a period of sticking together, this creates an earthquake.

For the case of this fault on Mars, it is unlikely that a “Marsquake” occurred when movement happened along this fault, because it is so small (over 1000 times shorter than the San Andreas Fault). This is interesting because faults are rare in the Martian polar layered deposits. The fault may have been created during widespread flow of the SPLD. Some of the stiffer ice could not flow and broke instead. Ice can only flow fast enough to create faults when it is relatively warm. Similarly, if you cool molasses enough, it becomes hard and doesn’t flow. But the temperatures on Mars today are probably not warm enough to allow the creation of faults. This is why faults are so rare in the Martian ice. When were temperatures warm enough? This is still a mystery.Written by: Kate Fishbaugh   (15 August 2007) 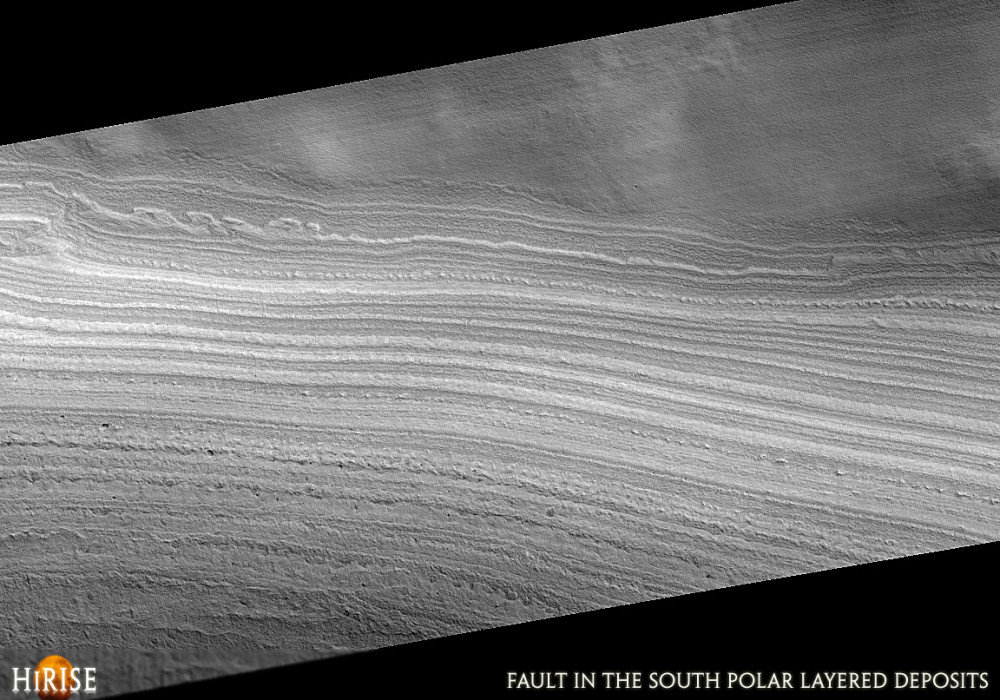