This image shows part of a pedestal crater overlying a flat-topped ridge several degrees north of the Martian equator and just west of Meridiani Planum, the landing site of the Mars Exploration Rover, Opportunity.

Part of a crater and its ejecta blanket (the deposit of debris that surrounds the crater, created by a meteorite impact on the surface of Mars) is visible in this image. The ejecta blanket is composed of materials which are resistant to erosion and coat surface material around the crater causing it to erode more slowly than the rest of the region. Eventually, erosion of the topmost layers of the surrounding plains cause the crater and ejecta to appear as if standing upon a raised platform or pedestal. Features such as this on Mars are called pedestal craters. In this example, the eroding ejecta has ragged edges with some detached mesas and buttes and resistant layers in the ejecta are forming steep and overhanging cliffs.

Emerging from the rock beneath the pedestal crater is an inverted flat-topped channel. Similar to the pedestal craters, inverted channels occur when former channel depressions become elevated because materials that fill the depressions are more resistant to erosion than the surrounding terrain. For example, a depression may become filled with lava that is more resistant to erosion than the surrounding surface, or gravel or boulders transported in a high energy flow that protect underlying material from erosion, or sediments deposited by a flowing stream that have become cemented.

In this image, the pedestal crater superposes the flat-topped ridge indicating that it is younger and formed after the channel. Therefore the channel formed first, possibly a result of water flowing on the surface. Resistant materials were deposited on the flat channel floor and the channel was later filled and buried by sediments.

Even later, a meteorite impacted the surface of sediments above the channel forming a crater and ejecta blanket of resistant materials that protected underlying materials from being blown away and eroded. Over time, the topmost layers of the surrounding plains eroded due to winds or climate change or other factors leaving the crater and ejecta raised above the surrounding surface. Continued erosion also eventually exhumed and inverted the flat-topped channel in the rock layers beneath the crater. 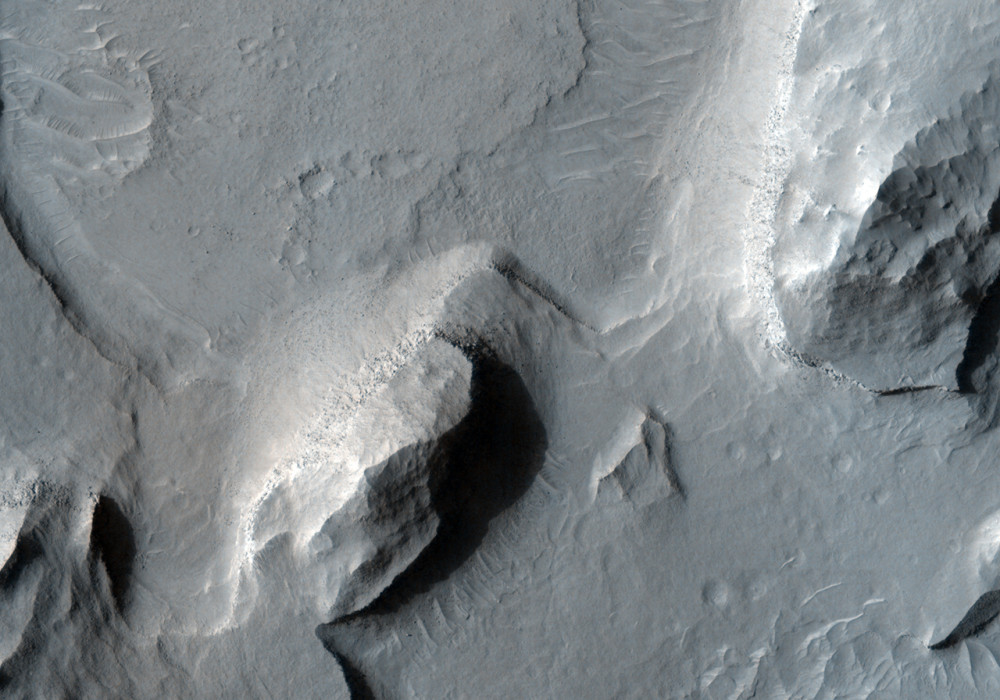