Floor of the Labyrinth of the Night

This image shows part of Noctis Labyrinthus, the Labyrinth of the Night. This is a system of connecting troughs which form a maze-like network at the western end of Valles Marineris, the giant canyon system of Mars.

The individual troughs are usually kilometers across; this image shows part of the floor of one of the troughs, with some intriguing fine-scale features.

Near the center of the image, the floor is broken up into many small knobs and hills, probably eroded remnants of a larger geologic unit. The most striking feature of many of these knobs is a thin, bright band which often wraps around the edges near the bottom, as in the image cutout. This image was acquired in order to investigate whether this is an exposed layer of rock or the shoreline of a former body of water.

HiRISE resolves details of the bright band that indicate that this is an unusual layer of rock, rather than an old shoreline. In several places, the band is broken up along cracks, sometimes forming boulders. This indicates that the band is solid rock, while material left on a shoreline should be loose sediments. It is now exposed as rings and arcs where erosion has cut deeply enough to expose the layer.

This band must indicate some unusual event in the geologic history of the region when a different type of rock was deposited; it is strikingly different in color from the other rocks. Although it is not a shoreline, it could be material that was deposited on the floor of a much older lake or sea and then buried by other rock; it could also have been laid down by other sedimentary processes or as volcanic ash. Written by: Colin Dundas   (29 February 2008) 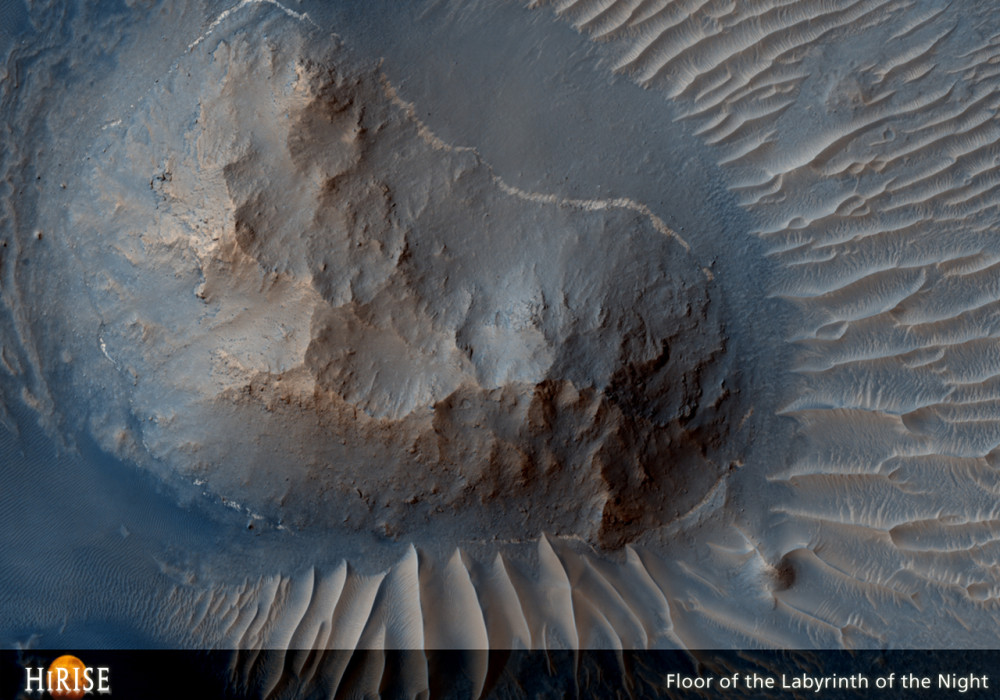