This image, part of the south-facing slopes of a massif in Promethei Terra in the southern highlands, shows flow-like features (tongue-shaped lobes, parallel ridges) that indicate movement of surface materials downhill and towards the southwest, following the regional slope. (See this THEMIS image for regional context.)

The difference in elevation between the ridge (near the top or northern-most portion of the image) and the valley (to the south) is over 2,200 meters (7,200 feet); illumination is from the lower-left.

These flow-like features are reminiscent of those observed in terrestrial landslides and rock glaciers , in which the downhill movement of rocks and soils is facilitated by an agent (most commonly water in landslides, ice in glaciers) that acts as a lubricant and provides cohesion. Theoretical calculations predict that under current and recent Martian climate conditions, neither water nor ice would be stable near the surface for extended periods of time in this region. The temperatures are so low that water would freeze, and then quickly sublime, because the air is very thin and dry. Ice could, though, be stable at present approximately 1 meter (3 feet) or more below the surface.

The subimage (approximately 390 x 260 meters or 420 x 280 yards; 1541 x 1022 pixels, 1.6 MB) shows in detail some of the ridges developed in the slope deposits. Numerous fissures cut through the surface, forming polygons 5 to 10 meters (5.5 to 11 yards) across. Such well-preserved polygons indicate that the downhill flow had stopped before they formed. Polygonal features similar to these are common in terrestrial periglacial regions such as Antarctica, where ice is present at or near the surface. Antarctica’s polygons formed by repeated expansion and contraction of the soil-ice mixture due to seasonal temperature oscillations. Written by: Sara Martinez-Alonso   (8 October 2007) 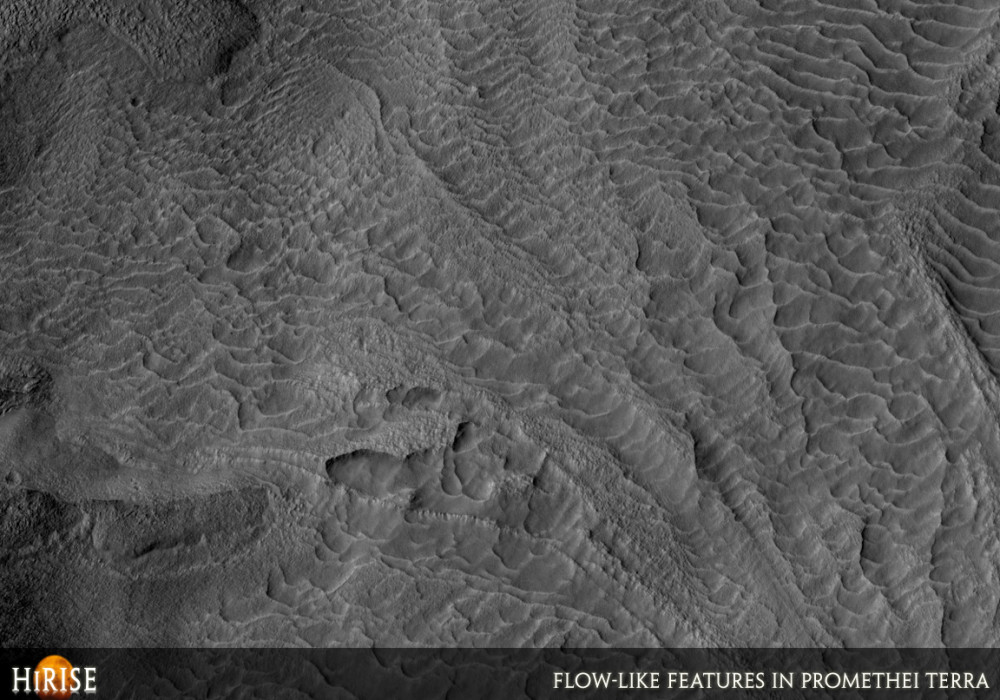