This observation shows gullies in a crater in Terra Sirenum in the Southern hemisphere of Mars.

This image was acquired during the winter, which explains the abundant frost (the bright material) seen throughout the image. The frost is likely water frost, as opposed to carbon dioxide, because temperatures at this latitude probably do not get cold enough for carbon dioxide to condense.

The formation mechanism of gullies is much debated. Several theories support erosion by liquid water, while others favor dry debris flows or carbon dioxide. A major unknown is, if the gullies are formed by liquid water, does the water originate from the surface or subsurface? Dendritic structures, such as those seen in the alcove displayed in the subimage (approximately 1.3 km across; 2560 x 3000, 7MB), form from surface runoff on Earth. Water originating in the subsurface would not produce a structure like this. This alcove is evidence for a surface source for the water possibly required to form gullies.

Also interesting about this scene is the fact that the gullies occur at multiple elevations along the same crater wall. This is uncommon on Mars. Gullies, whether or not they are found in conjunction with an obvious horizontal layer, usually form at the same elevation on a given slope. It is unknown what caused these gullies to form at multiple elevations. Their locations are suggestive of a distributed water source, which also favors a surface, rather than a confined subsurface origin of water, such as an aquifer.
Written by: Kelly Kolb   (22 December 2010) 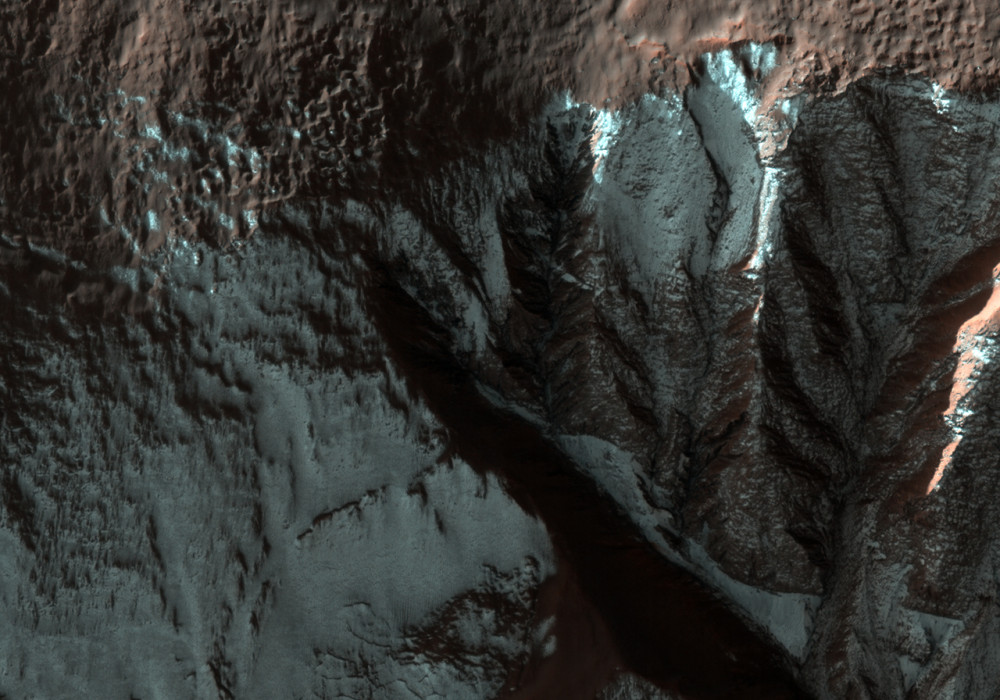