This observation shows an area southwest of Tharsis Montes, where some of the largest volcanoes of Mars are located.

The image looks very flat and homogeneous; some parts of it may even appear out-of-focus at first. However, sharper-looking features such as the crater and the long landslide scars (250 x 375 meters, or 270 x 410 yards) show that the fuzzy look is not an artifact of the image, but rather indicative of an extremely smooth surface. That smoothness is due to a thick layer of dust blanketing the landscape.

How do we know this is dust? The lines of evidence below indicate that this is the case.

Surface temperature measurements performed from satellites orbiting Mars show that these materials get relatively warm during the day (when they are illuminated by the Sun) and very cold at night. Rocks or sand would not experiment such large temperature oscillations between day and night. That is, dust has lower thermal inertia than rocks and sand.

Also, dust is uniformly bright (light) in color. Fine-grained materials are generally lighter in color that their coarser-grained counterparts, because of the way light is scattered (bounced) by fine particles. Martian dust has consistently a very light, reddish color, characteristic of the oxidized (rusty) iron in it.

Another piece of evidence is that even though these materials are loose ( as shown by the landslides ), they are not movable by wind (demonstrated by the lack of dunes . Wind does not move dust easily; stronger winds are needed to move dust alone than to move sand. This is because cohesive (sticky) forces between dust particles lock them into the surface.

On Mars, where the air is approximately 1,000 times thiner than on Earth, wind speeds on the order of 450-650 km/hour (280-400 miles/hour) would be required to move pure dust. If dust was mixed with sand, then it would be easier for weaker winds to move the dust particles, by hitting them with sand grains and thus lofting the dust into the air. 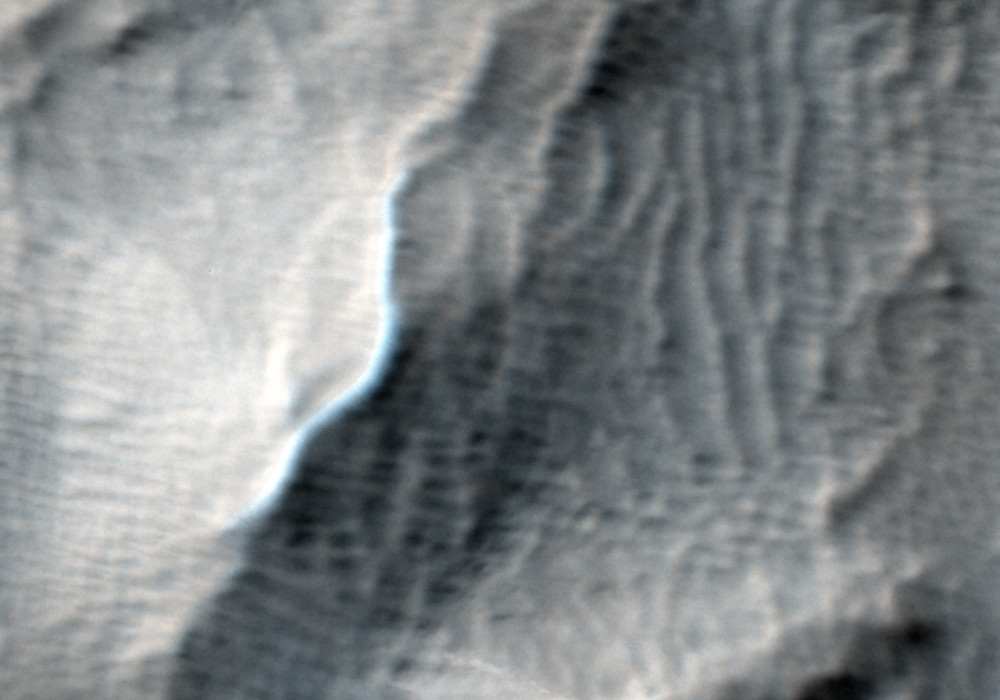