This image shows gullies in the walls of a large impact crater in Tempe Terra. These gullies look quite older than other gullies imaged by HiRISE elsewhere on Mars.

We cannot tell what is the absolute age of these “geezer gullies” (that is, how long ago they formed), because actual rock samples would have to be analyzed with radiometric dating techniques to get that information. However, this image indicates that they have been inactive for a long time.

This subimage shows some of these gullies in detail. The walls of these venerable gullies have gentle, smooth-looking slopes which contrast with the tall and steep walls of younger gullies. Their floor is even and lacks sharply incised channels that would indicate recent activity. The weathering processes required to produce such a smooth landscape are very slow and thus must have acted during a long period of time.

The gullies appear cut by long fractures that criss-cross the crater’s walls, and pockmarked by numerous impact craters which are just a few meters (yards) in diameter. According to cross-cutting relationships (used by geologists, archaeologists, and other detective-types to establish relative ages), this means that the gullies must be older than the fractures and small craters. Crater counting is a valuable technique used to estimate the relative age of terrains on Mars and other planetary surfaces; the more time a terrain has been exposed at the surface, the more craters it has accumulated.

The color and brightness of the gullies is similar to that of their surroundings, probably due to a veneer of undisturbed, homogeneous dust mantling the entire region.

All these lines of evidence indicate that these gullies have remained inactive for a long period of time. Why are they “dormant,” while other Martian gullies appear to show recent activity? Studying both old and young gullies will help us learn more about their processes of formation (erosion from seepage of subsurface water? melting of ground ice or surface snow? dry landslides?). Their differences will tell us how these processes (many of which depend on Mars’ climate) may have evolved through time. 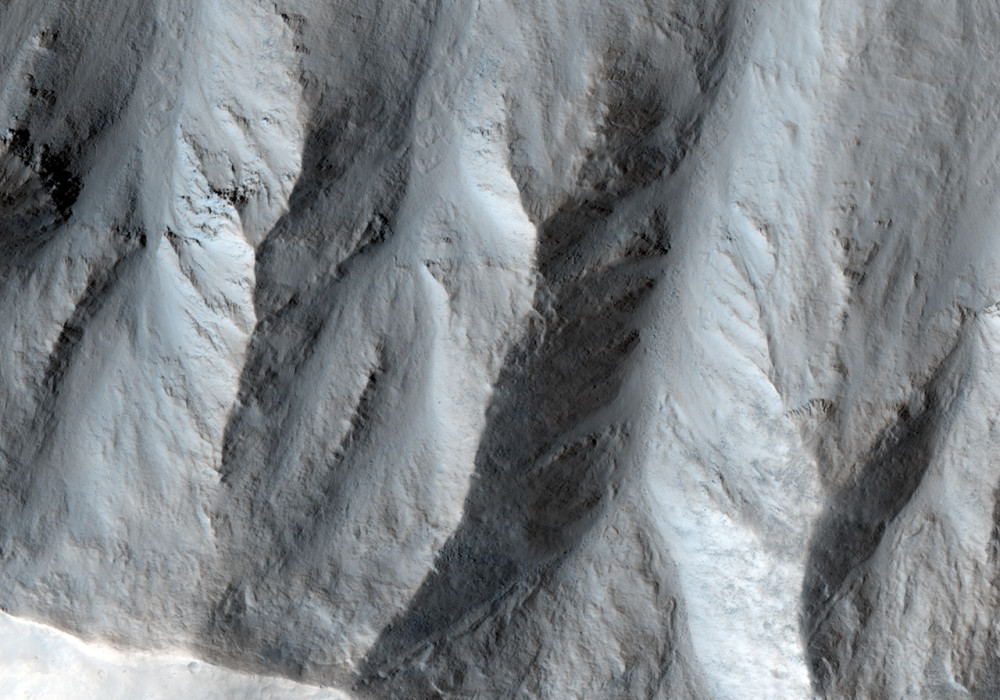