Ice can be a powerful force of erosion, particularly when it accumulates into thick deposits. Glaciers on Mars were once proposed to be likely because of the planet’s cold temperatures. The global average temperature of Mars is about -68 Celsius (-90 Fahrenheit).

Glacial-looking landforms are now seen to be commonplace, and even abundant in mountainous regions at higher latitudes such as here in Protonilus Mensae. These landforms are quite similar in appearance to glaciers on Earth.

This image shows an example of such a landform. The mountain valley to the North (toward the bottom of the unprojected image) would be the zone of accumulation of snow and ice, which then flowed downhill (toward the top of the image) and out onto a neighboring plain. The evidence of this flow comes from the myriad of stream lines and flow fronts visible in the surface topography. Some of these topographic features may also be “moraines,” ridges of rock and soil debris common on the surface of glaciers and at the boundaries.

Boulders up to 3 meters (9 feet) in size are visible on the surface of this feature. If you trace the streamlines from these boulders back uphill into the accumulation zone then you’ll see where boulders have tumbled off the valley walls before being rafted downhill to their current location. This process continues today even though the feature itself may not be flowing significantly anymore.

Once onto the more level plain, the ice flow stalled and spread out into a bulb shaped pile where it would have gradually evaporated, called the ablation zone.” Melting of the ice might have also occurred, though geologic evidence of melting has not yet been found.

Today, Mars is very dry place, and surface ice is unstable everywhere except on the polar caps. Any ice left on the surface would evaporate without ever melting, a process called “sublimation.” However, past climate changes may have periodically allowed snow and ice to be stable on the Martian surface and even to build into glacial masses, hundreds of meters (yards) or more in thickness.

In this image, the surface is made up of regolith (rock and soil debris) and no ice is visible. Interestingly, subsurface ice may still be present as relatively soil-free ice, which would then be called a “debris covered glacier.” Ice may also occur as a cement between rocky material throughout the glacial deposit and would also be capable of flowing like a glacier, which is called a “rock glacier.” Alternatively, the ice may have all sublimated and what we see now is a residue of the “glacier till,” remnant ice-free rock and soil debris.

Future stereo images of this landform will help scientists to understand the surface tilt and the forces driving ice flow under Martian gravity. In addition, stereo topography may help in estimating the thickness of the feature we see here and if any subsurface ice may still be present. 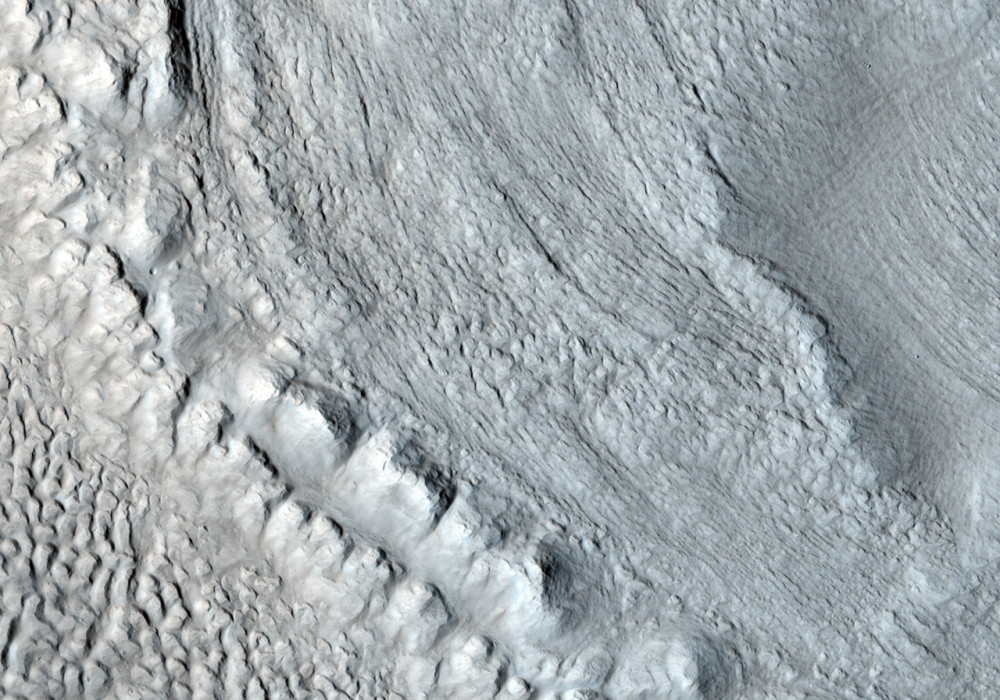