This is an image of (most of) a crater in the Southern highlands at approximately 43 S latitude. This is within the latitude zone on Mars where volatiles such as water and carbon-dioxide undergo seasonal activity such as sublimation (the conversion from a solid ice to a gas) and deposition (the opposite, turning from a gas to a solid).

The walls are etched with gullies and associated features, and it is interesting how their form varies around the walls of the crater. On the northern wall there are relatively few gullies in the smooth wall, but they are long and straight. On the western (left) wall, the upper slopes are incised with gullies but the lower walls seem to be covered with lobes or fans of material that may have been transported down the gully.

Along the arc of the southern wall , there is at least one clear horizontal ridge indicating the location of an erosion-resistant layer within the subsurface that was exposed for us to see in the crater wall when the crater formed; gullies here are short and straight. The different forms likely have to do with the processes that initiate gully formation (whether related to water or carbon-dioxide frost or ice or neither), the material that was transported (dry soil, rocks, ice, or possibly even water), and the conditions experienced by the different crater walls (e.g., the amount of sunlight, the steepness of the slope, the exposure of the layer in the wall in the south).

The center of the crater appears to be filled with a pitted material, in which sub-parallel lines are also visible. The trend of these ridges is generally parallel to the crater wall. At the base of some of the walls, ridges (not necessarily straight) can also be seen. These ridges likely represent the accumulation of material at the base of the crater-wall slope. With many episodes of material moving down the slope and creating these ridges, one by one, the ridges get pushed and squeezed further towards the center of the crater, forming some of the linear patterns in the crater center.

This crater has been imaged several times and continues to be monitored in order to better understand what the role of water and carbon-dioxide frosts and ices may play in forming the gullies. 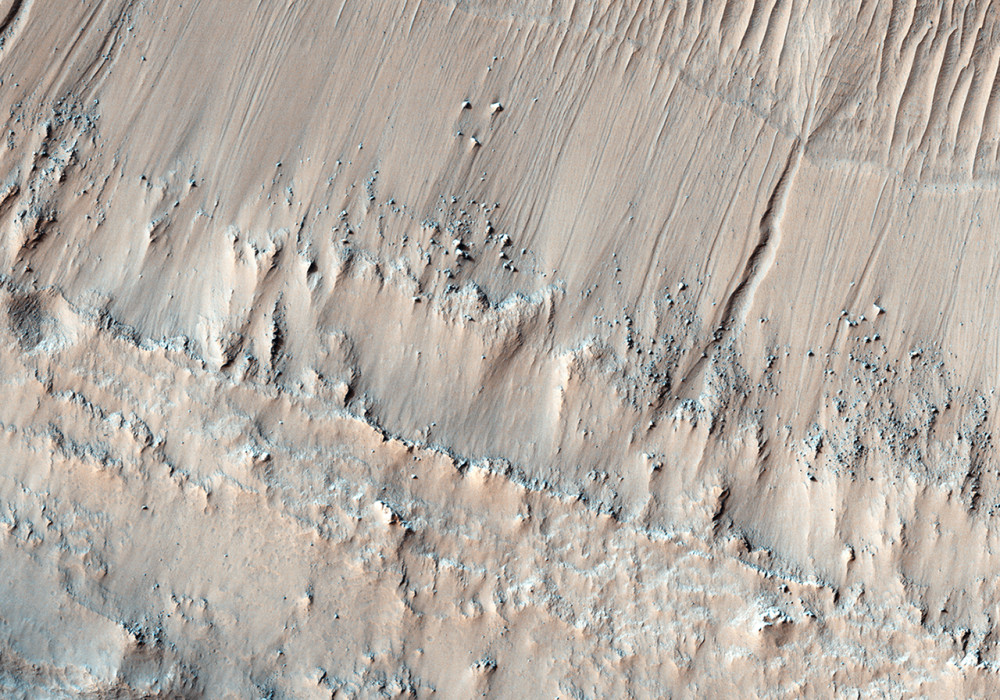