This observation shows gullies and arcuate ridges in a crater in the southern hemisphere of Mars. Arcuate ridges and gullies are found together at many places on Mars, leading some researchers to suggest that their coexistence may be a result of a single process.

Conversely, there are many locations on Mars where gullies and arcuate ridges are found alone, causing the debate about the relationship, or lack thereof, between their origins to continue. The bright regions in this image are frost, probably water frost, that is deposited and removed seasonally.

The arcuate ridges are the wavy features on the crater floor. They appear to parallel the alcove heads (upslope end) of the gullies. Arcuate ridges resemble protalus ramparts that are found on Earth. Protalus ramparts form at the bottom of snow-covered slopes when rock debris becomes separated from the slope face and accumulates downslope.

There is a mantled unit that covers the majority of the mid-latitudes of Mars that is thought to be ice-rich. This mantled unit drapes over topography and likely contains large amounts of dust, creating a dusty “snowpack.” It is unknown how arcuate ridges form on Mars, but they are thought to be a result of mass wasting of ice-rich materials, possibly sections of the mantled unit.

The gullies seen in this image exhibit a range of morphologies. The large gully in the center of the image is deeply incised with a wide alcove. The gullies on the west (left) rim of the crater have small alcoves and tiny channels. Many of the channels appear to start at one of the fine layers that can be seen along this wall ( see subimage ). It is possible that water came from underground along these layers to form the gullies. The gully on the far left of the image extends all the way to the top of the slope. It is likely that the water that fed this gully came from one of the layers and then the slope experienced headward (upslope) erosion and collapse to extend the alcove to the crater rim.

Note: The alternating stripes on the left side of the full image are camera artifacts, not Martian features. 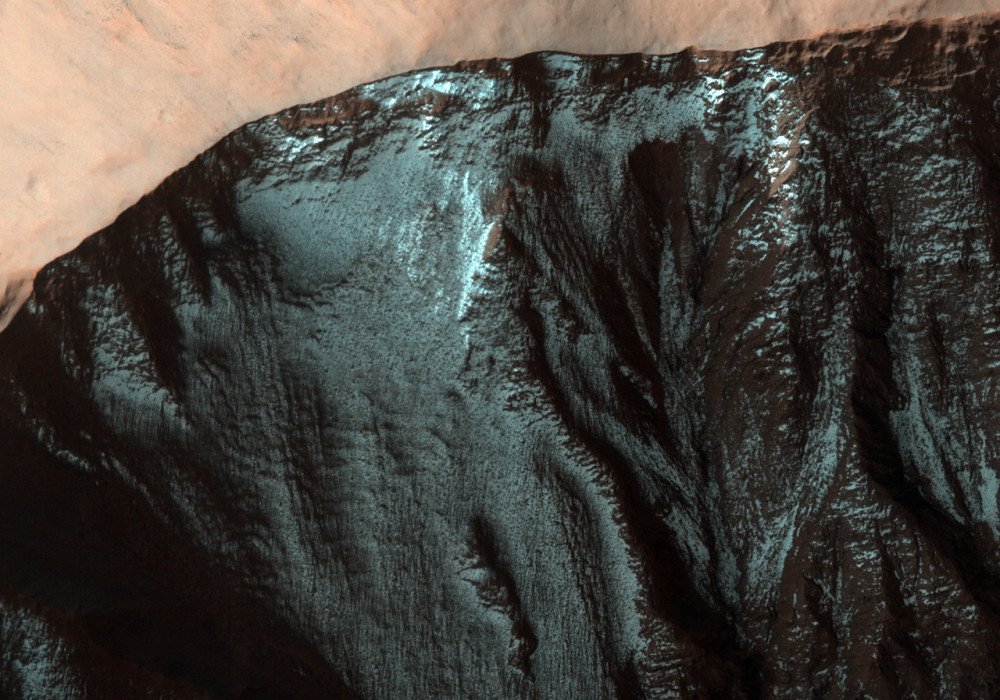