This image shows part of a relatively small (14 kilometers, or 9 miles across) unnamed impact crater in Noachis Terra. The tongue-shaped crater’s ejecta, gullies in its walls, and “concentric crater fill” in the crater’s floor may indicate the presence of water and ice at some point during its history.

A close-up of a CTX context image of this same crater shows the typical lobate ejecta pattern characteristic of rampart craters, indicating that ice-rich or water-rich materials were excavated at the time of impact. According to this theory, the rock ejected from the crater mixed with the water and water vapor, and thus flowed more easily along the surface. Another possible interpretation is that fine-grained rocky material mixed with air and formed the rampart pattern in the absence of water.

The gullies shown in this image are similar to terrestrial gullies produced by flowing water. The current Martian climate would not allow for liquid water to be stable at the surface for extended periods of time, though. It is so cold (in the order of -70 C or -90 F) that the water would freeze, and then it would sublimate quickly, because the air is very dry and thin (the atmospheric pressure is on average less than 1/100 of that on Earth). These gullies could have formed under a different climate, or perhaps they were carved by short-lived streams; they could also have been produced by dry landslides.

“Concentric crater fill,” crater-interior deposits that form concentric ridges, is found at high latitudes (approximately above 30 degrees from the equator). Theoretical calculations indicate that ice may exist under the surface at such high latitudes, mixed with rocks and soil. The roughly concentric ridges and troughs in this crater’s floor may have been produced by compression caused by viscous flow of a thick mixture of rocks, soils, and ice inward from the crater’s walls. 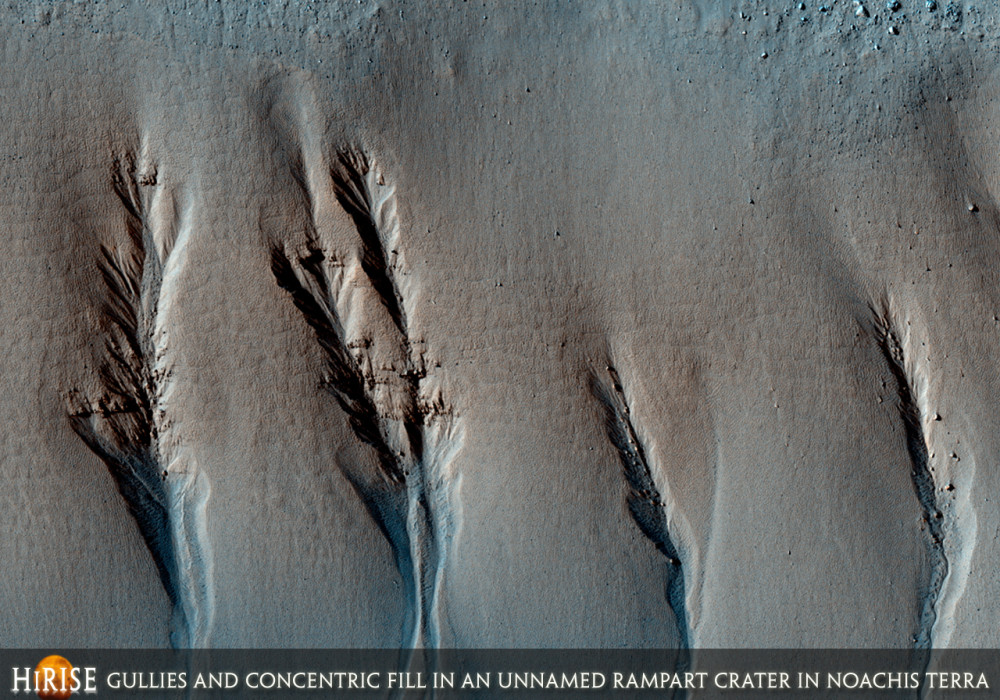