This observation shows gullies in a trough in Noachis Terra.

The trough is actually one section of a “trough crater.” Here the term “trough crater” refers to a roughly circular trough that appears to follow the wall of a crater. A great deal of geologic activity is needed to transform an impact crater into a trough crater. First, the crater must have been filled in with some type of sediment. Second, the outer edge of the filling must have been scooped out by an unknown process, leaving a trough in the form of a ring inside the crater.

The trough in this observation is located on the North wall of the Southern end of the trough crater. Gullies can be seen to start at multiple levels on this wall. The Martian gullies are thought to require some amount of liquid water to form, although carbon dioxide and dry debris flows have also been suggested as erosional materials. The start of gullies across Mars are often correlated with layers as seen here. What is particularly interesting about these gullies is that the heads (tops) of the gullies are located at many elevations along the same slope, and that each elevation with gullies has an associated set of layers.

One thing to notice is that often a layer correlated with a gully is most eroded where the gully occurs. (See, for example, the gullies located in the bottom center of the image and the subimage, ). At the bottom center, there are two gullies present, and the layer where they appear to originate is most eroded where the gullies exist. In the subimage, the deeper gully channels correspond to locations where the layers have been more eroded. This suggests that undermining may be occurring. Undermining often happens when water from the subsurface reaches the surface and destabilizes nearby material. The water erodes material in its way, which can create an overhang. Once this overhang becomes unstable, it will collapse.

This might be the reason that the layers are the most eroded near the gullies. It would support a subsurface origin for the water that formed these gullies. Undermining can also be generated by surface water if a weak, easily erodible layer lies beneath a stronger layer. 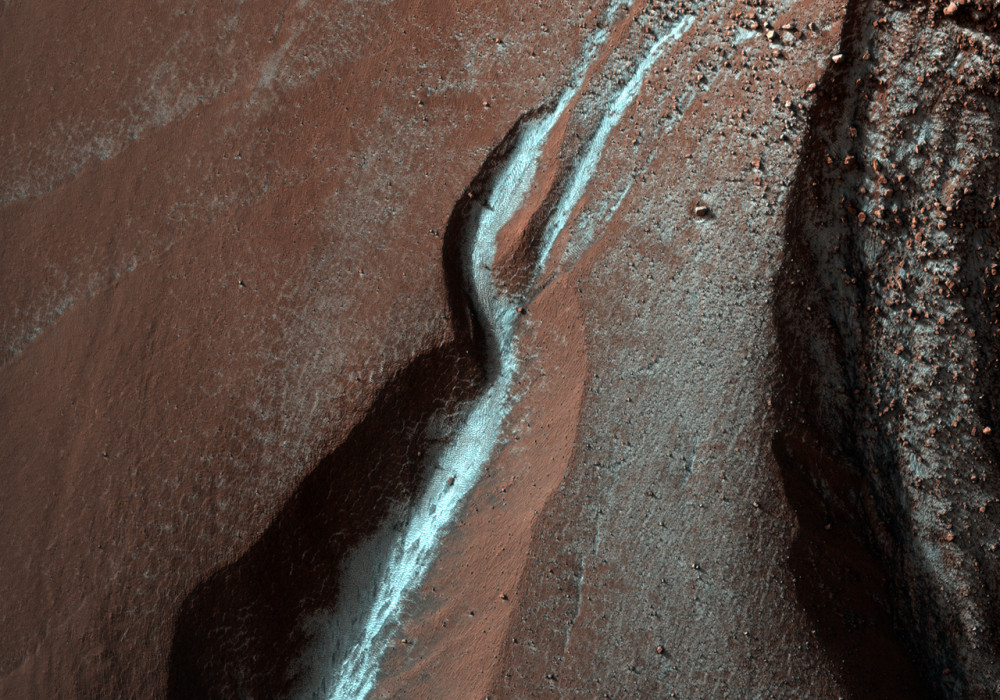