This image covers the eastern part of an unnamed crater located in the northern lowlands, showing features such as gullies, arcuate (bow-like) ridges, and scalloped terrain, that may indicate the presence of ice-rich materials near the surface.

As the CTX context subimage shows, the crater has gullies in its northern half (equator-facing slopes); no gullies are apparent in the southern half (pole-facing slopes). This observation is in agreement with theories proposing that some Martian gullies could form by melting of an ice rich-mantle deposited under different climatic conditions. Such ice-rich materials would be especially unstable in equator-facing slopes, where they would be exposed to maximum insolation (solar illumination).

The HiRISE image also shows arcuate ridges where the craters slopes meet the floor. These ridges are 10-to-30 meter (30-to-100 feet) wide and can be followed for hundreds of meters (yards). They are similar to terrestrial features produced by mass wasting of ice-rich materials.

This HiRISE subimage (358 x 266 m or 392 x 291 yards) shows incipient scalloped terrain in the southern slopes of the crater. Scalloped terrain—depressions with scalloped edges and polygonal fractures—has been interpreted as a sign of surface caving, perhaps due to sublimation (evaporation) of underlying ice. 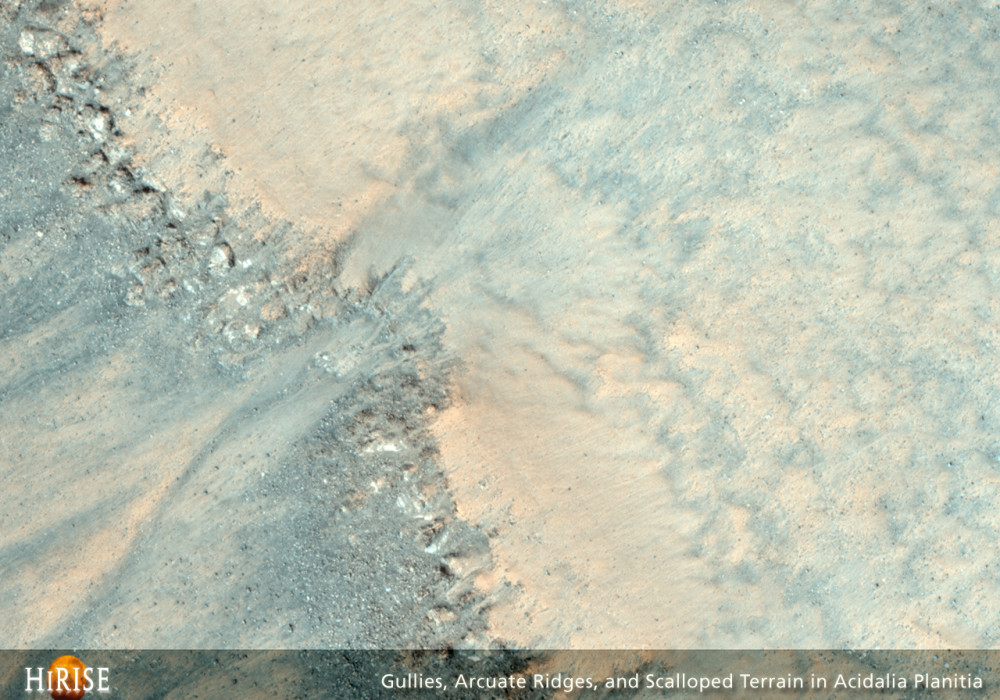