This observation shows the east-facing walls of an unnamed crater in Sisyphi Planum, near the south polar region. Gullies, as well as mantle terrain and polygons are visible; these features suggest that at some point in time, liquid and ice may have been present at and near the surface.

The gullies, which are rather eroded, have ample alcoves and subdued channels; dark patches and ripples in the bottom of the channels indicate that the most recent activity was aeolian (wind-driven) in nature.

Mantle terrains are characterized by their smooth surface and light, uniform color. They are widely interpreted as terrains blanketed by a mixture of ice and dust, deposited under climatic conditions different from that of today. The gullies in this image have alcove areas that seem to have cut through the mantle terrain, exposing the underlying materials. The subimage (approximately 375 x 275 meters or 410 x 300 yards, 1500 x 1100 pixels, 4.8 MB) shows the boundary between one of the alcoves (to the bottom) and the surrounding mantled terrain (to the top). North is up, downhill is to the right, illumination is from the upper left.

Numerous fissures arranged forming polygons some 3 to 10 meters (3.3 to 11 yards) across are visible in the image. These are similar to features found in terrestrial periglacial regions such as Antarctica, where ice is present at or near the surface. Antarctica’s polygons form by repeated expansion and contraction of the soil-ice mixture due to seasonal temperature oscillations; this results in polygonal networks of stress fractures.Written by: Sara Martinez-Alonso   (26 September 2007) 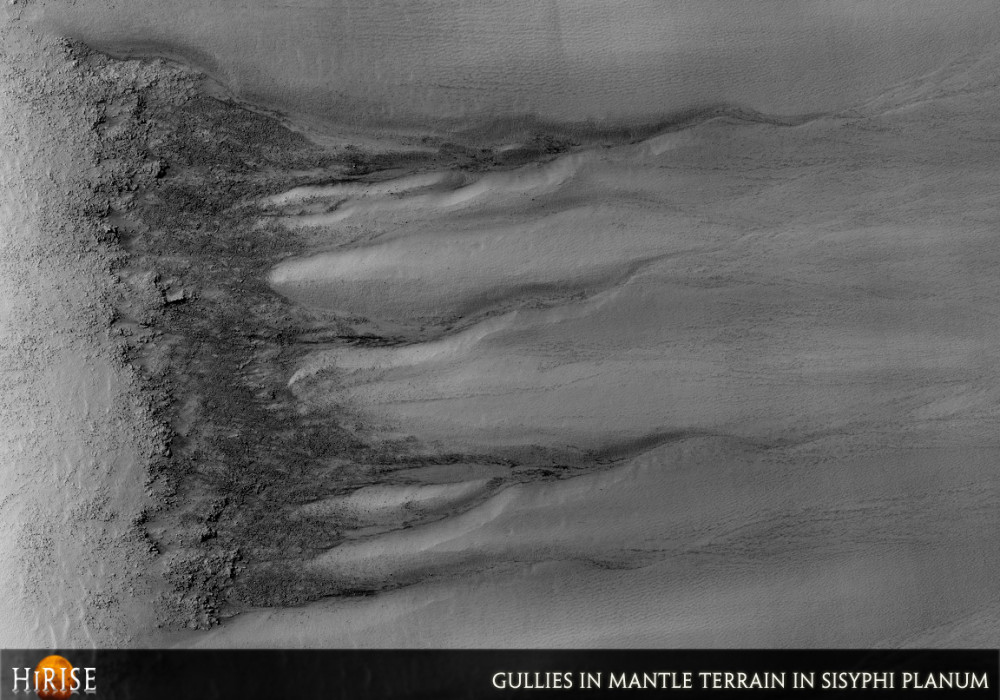