Image PSP_004804_1105 shows the walls of a large pit inside Lyell Crater, near the south polar region.

This image was acquired during a period of elevated atmospheric dust, following a series of dust storms that encircled the planet; this is the cause of the longitudinal bands of contrasting gray levels in the image. We can still see through the thick atmosphere, though, gullies and other subtle features which could have been produced by water and ice present at or near the surface.

The gullies shown in the subimage experienced several periods of activity, as evidenced by older channels cut by younger ones or by their deposits. The current and recent Martian temperatures and atmospheric conditions would not allow for water to be stable at the surface for extended periods of time: it is so cold that the water would freeze, and then it would sublime quickly, because the air is very thin and dry. These gullies could have formed under a different climate, or maybe by repeated bursts of transient fluids. Current leading hypotheses explaining the origin of gullies includes erosion from seepage or eruption of water from a subsurface aquifer, melting of ground ice, or dust-blanketed surface snow.

The otherwise subdued surface in this region is criss-crossed by numerous fissures, forming polygons some 10 meters (11 yards) across. Similar features in both shape and scale can be found in terrestrial periglacial regions such as Antarctica, where ice is present at or near the surface. Antarctica’s features are the product of repeated expansion and contraction of the soil-ice mixture due to seasonal temperature oscillations. This results in polygonal networks of stress fractures.Written by: Sara Martinez-Alonso   (24 November 2010) 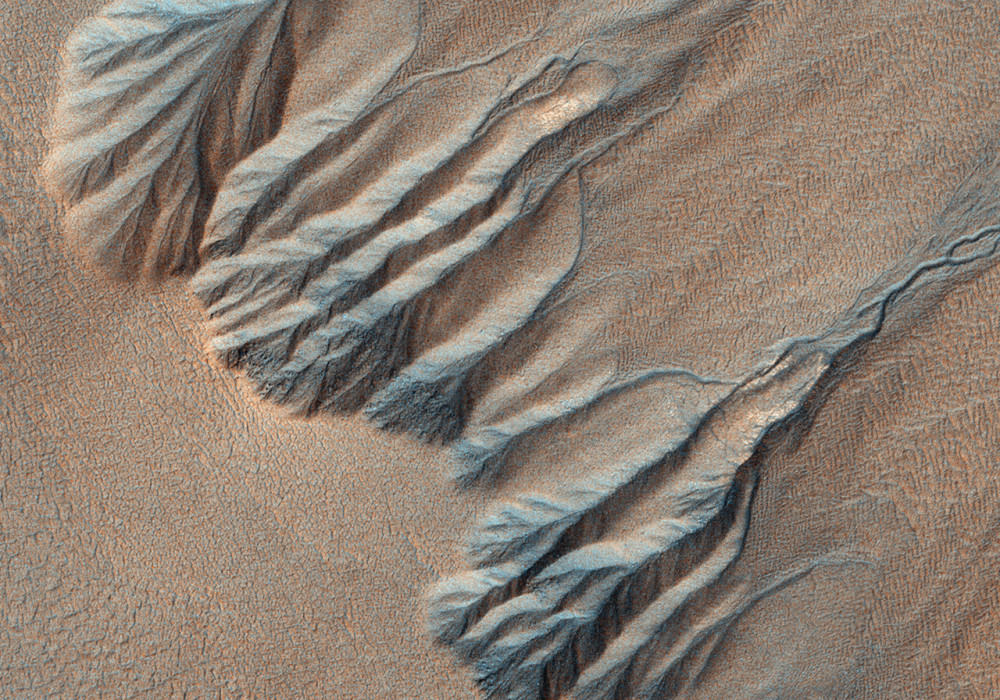