Gullies in the Central Peak of Martz Crater

This image shows part of the central peak of Martz Crater in Terra Cimmeria. This crater is almost 100 kilometers (60 miles) in diameter and approximately 1.5 kilometers (1 mile) deep. For a different view, see this Mars Orbital Camera wide angle image .

Its very prominent and steep central peak (1500 meters or 5000 feet tall) formed at the same time as the crater, due to rebound right after a large object (approximately 8 kilometers, or 5 miles, across), impacted the surface. Central peaks are common in large, relatively young craters; those in older craters are masked by erosion and infill.

The HiRISE image shows gullies in south-facing walls of the central peak. These gullies have alcoves, braided channels, and well developed terminal debris aprons; they seem to originate at different heights in the walls. The subimage shows some of these gullies in detail; illumination is from the left, downhill is down. The walls of some of these gullies have polygons similar to features observed in terrestrial periglacial regions such as Antarctica. Antarctica’s polygons are produced by repeated expansion and contraction of subsurface soil and ice, due to seasonal temperature oscillations.

The gullies shown here are very similar to gullies observed on the walls of craters elsewhere on Mars. However, gullies in central peaks and some gullies on crater walls may have formed due to different processes. Current leading hypotheses for the origin of gullies in central peaks include: accumulation of snow followed by melting and runoff; impact-induced atmospheric precipitation; surface runoff of water released from the subsurface during impact; tapping into a deep aquifer, and dry landslides.

Other intriguing features in this crater are the wide, branching channels shown in the southern half of this HiRISE image. Their dramatic appearance is due to the contrast between dark wind-blown materials and their brighter surroundings. 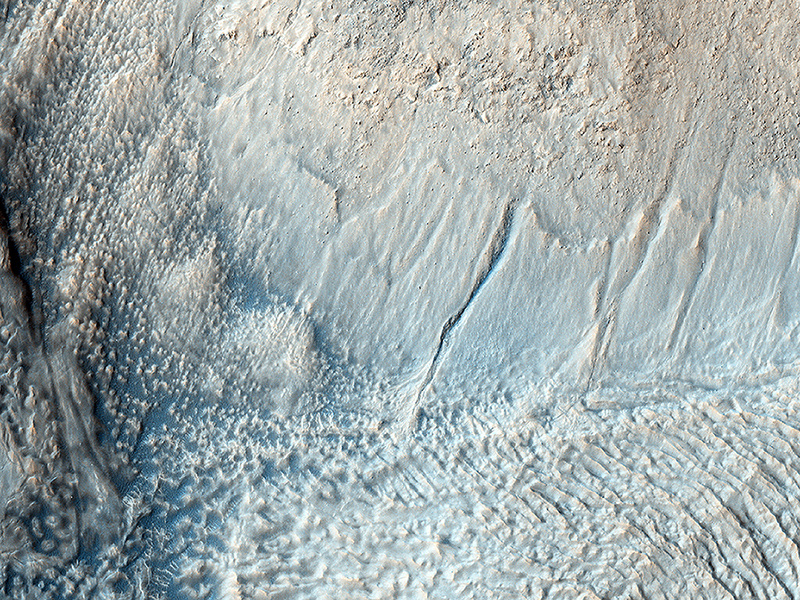