Gullies in Trough near Gorgonum Chaos

This image shows gullies in a trough that is near Gorgonum Chaos, a region filled with gullies.

The trough gullies, like many of the gullies on nearby Gorgonum Chaos mesas, appear to originate at a distinct layer. There are mounds within the trough that have layers exposed near their peaks. The layers in the mound ( see subimage, ) and on the trough walls are resistant, meaning they do not break up mostly into small particles that the wind can easily carry away.

Instead, they are breaking up into boulders up to several meters wide that HiRISE can see. (The fact that the layers are eroding as boulders tells us that the material is not easily broken up into smaller and smaller pieces, so it is therefore termed “resistant to erosion.”) However, it is not completely resistant to erosion as we can see by the boulders rolling down the slopes.

Gullies are thought by many to require liquid water to form. A major debate is whether this water comes from the surface (i.e., melting surface ice or melting snow) or the subsurface (i.e., from an aquifer). Gullies are often found to originate at layers, like those seen here. The subsurface water theory states that water travels under the surface to slope faces where it flows down the slope to form gullies. Visible layers are suggested to be impermeable, such that water cannot penetrate them, which is why the gullies originate from beneath the layers.

Often gullies will originate between layers, which suggests that there is a permeable layer trapped between impermeable layers. It is also possible that the layer preferentially traps ice or snow that may melt to form gullies, thus providing a surface source of water to form the gullies.

Please note that the stripe-like features on the left side of the image are camera artifacts and not real features. 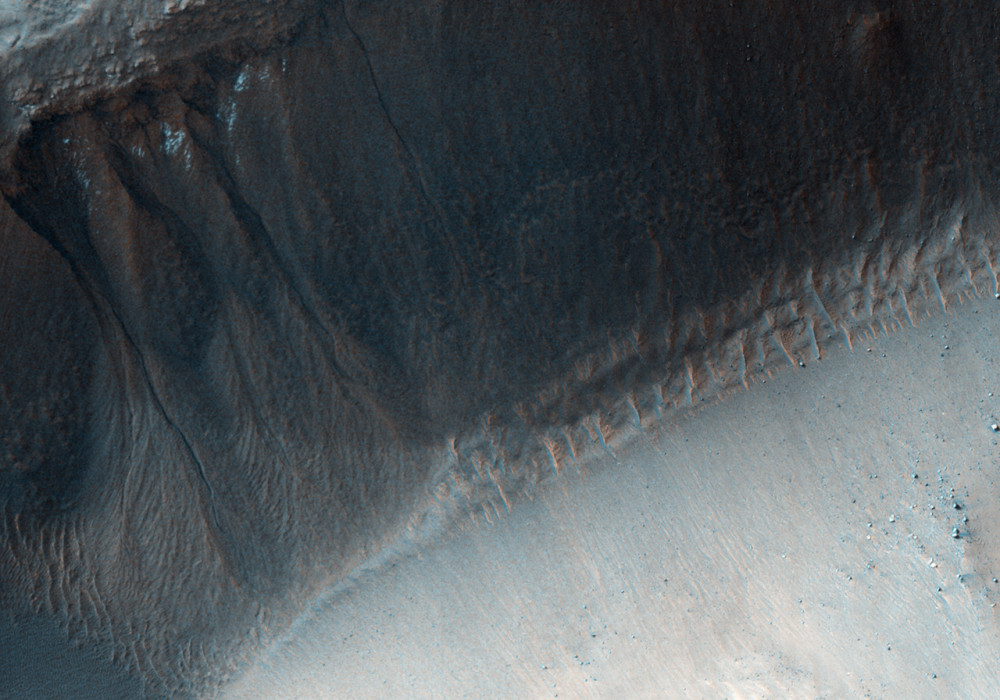